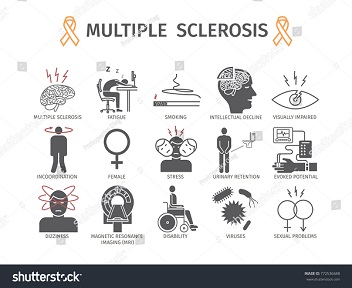 Multiple sclerosis (abbreviated MS) is one of the commonest motor speech disorders. Disorders resulting from neurological damage that affects speech production are referred to as Motor Speech Disorders.

It typically affects adults between 20 and 40 years and above though much younger people can be affected. In 2018, the World Health Organisation (WHO) reported that MS deaths in Ghana reached 18 or 0.01 per cent of total deaths.

Neurons (nerve cells) are electrically excitable cells in the nervous system. Neurons are surrounded and protected by fatty layers known as myelin sheaths. Besides protecting nerve fibres, myelin facilitates the ability of the nerves to conduct electrical impulses to and from the brain.

Nerve fibres can be damaged or broken.

In MS, myelin in various parts of the central nervous system is attacked (demyelination). Myelin is lost in multiple areas, leaving scar tissues referred to as sclerosis. When myelin is destroyed or damaged, the impulses to and from the brain is disrupted.

The cause of MS is yet to be known but it is thought to be a combination of environmental factors, virus infection and genetic factors. MS is not curable at present but it does not mean that it cannot be treated.

Everybody’s symptoms are different. MS is not contagious. It is often diagnosed through medical history, scans and neurological exam by a neurologist.

MS varies from person to person. It does not follow a set of patterns. There are recognised ways of describing different patterns of MS (benign, relapsing/remitting, secondary progressive, primary progressive). The most common symptoms include:

• Unsteadiness when walking (ataxia) and tremor

• Changes in sensation in the arms, legs or face

(The majority of people with MS do not have all these symptoms. Early signs are usually mild).

Following assessment, the SLT will advise on posture, texture of food and amount of food to be taken or make recommendations for other methods of feeding. The SLT works closely with the dietician in this field.

MS can also affect the production of speech. The speech and language therapist has a role in ensuring that the person with MS has good posturing adjustment for respiration which impacts a lot on speech. The therapist may also introduce strategies to make speech intelligible.

The SLT works closely with the physiotherapist in this field of therapy. Difficulties with memory are handled by the SLT.

People with MS may need to substitute other means of communication for speech (Augmentative and Alternative Communication — AAC) either temporarily or permanently when the disease is in its latter stage.

The decision to use AAC is based on a careful assessment of speech and communication by the SLT.

The SLT will discuss with the client, carers and family members, what may happen to speech over the course of the disease and what can be done to maintain speech intelligibility and effective communication.

The SLT works closely with a clinical psychologist in this field.

It is very important for people with MS to have access to accurate information and help available to them. Living with MS does not mean life has ended.

There are support services that aid people with MS besides the multidisciplinary team of health professionals (Speech and Language Therapists, Physiotherapists, Dieticians, Psychologists and Occupational therapists etc.) that work with people with MS.

The writer is a Speech & Language Therapist/Clinical Tutor, University of Ghana.