God helps those who help themselves 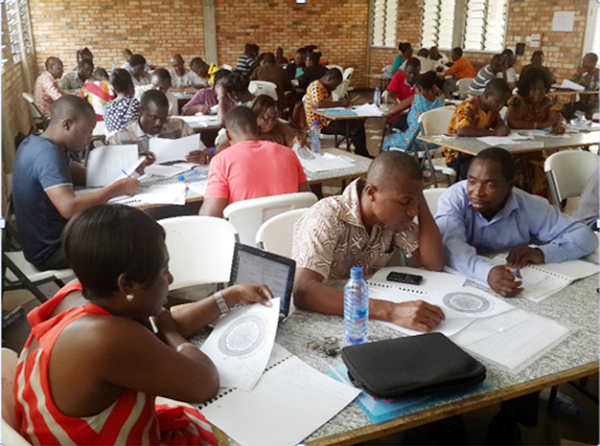 Within the past few weeks, from the Christmas season through to the New Year, 2018, I have received countless blessings and prophetic messages from well-wishers. Of course, I’m most grateful for them all.

Who doesn’t need a pat on the back! But the following message stood out, making sense to me in a way the others didn’t. In a nutshell, what it said clearly was that God helps those who help themselves. It went like this:

“For this coming new year I am not wishing anybody anything:

• If you want health, see the doctor, eat well and work out

• If you want money, go to work

• If you want a lover, be honest and sincere in your relationships

• If you want success, work hard, be patient and perseverant

• If you want happiness, make your neighbours happy

• If you want salvation, trust God and do his will.

God helps those who help themselves

As a teacher, committed in raising both young students and teachers to maintain acceptable standards locally or internationally, I see no truth in telling my students, for instance, that God will make them succeed regardless.

The first discipline I model is time consciousness. In other words, I’m hardly ever late to teach. I arrive much earlier than the prescribed time.

When I’m out of town, I arrive about an hour earlier to show the seriousness with which I attach to my work; and secondly, the respect I have for the teachers. I have on occasion seen some teachers arrive as early as I did, without being told to do so.

I particularly liked this message Mrs Comfort Engmann – founder of North Ridge Lyceum, Accra - posted on the school’s bulletin board in the mid-1990s, when I was conducting teacher training seminars at her school. It was a quote from the American poet, Henry Longfellow (1807 – 1882): “The heights by great men reached and kept were not attained by sudden flight, but they, while their companions slept, were toiling upward in the night.”

As I’ve often said in this column, in lieu of marching every March 6, with holidays to boot, the celebrations of our independence must mean more than a trifling tribute.

The children need loftier prospects than merely marching on. The force of superior examples is hard to ignore. Let’s learn and practise from Lee Kuan Yew, that is, the Singaporean experience where every school was designated an oasis of excellence. The miracles that transformed the south-east Asian countries did not happen by marching, and they sure did not happen by prayers.

Can there be any acceptable reason why by March 6, 2018 – a hefty 61 years after Ghana’s independence – a good many people will still be illiterate – including people who supposedly have been to school, who cannot read or write in their own mother tongue, and can neither read nor write in the official language, English?

How on earth can a nation so endowed by providence be so heartless that it neglects meaningful education for its own children, to start?

Educators at every level have the responsibility to assess – at any given time – whether education is succeeding in making people critical thinkers.

There’s a profound difference between students memorising the conclusions of others and repeating them ad nauseam, and students reasoning through those conclusions while fashioning out their own informed responses.

How those conclusions can be adapted to suit one’s unique environment is the question a truly educated person would ask!

It will never do to think within one fixed belief system. Actually, the more fixed one’s belief system is, the more they need to examine those beliefs.

The examined life of a bold educated person tends to be visionary, spontaneous, daring, uncommon, and dynamic.

Why does Africa continue to live in a permanent state of poverty? A continent so rich in everything except for the mind that thinks critically, the stuff which makes the great leaders! That is Africa’s fatal flaw, the “Achilles heel,” so to speak.

Little minds that think only about themselves and self-aggrandizement, hardly possess the stuff of great leaders who intend to see their people live much above the poverty line, and prosper.

Science education appropriate for each district

Education in a poor country becomes relevant when it is seen adding value to the natural endowment peculiar to the area. How exactly is knowledge power if not acted on to show that power in full bloom?
We have to resolve to know each district’s potential and work from there.

Once the districts find themselves, they will prosper and lose their misery. A most depressing aspect observed in the various districts is the sight of young people brimming with energy but sitting dejectedly like orphans.

A broad vision for education must be purposeful with the emphasis on the full use of the drive, enthusiasm, intelligence, and labour power of everyone in every district. Progress, by any other name, is spelled W-O-R-K. The surest way out of poverty is the creation of jobs.

Email: This email address is being protected from spambots. You need JavaScript enabled to view it.
Blog: www.anishaffar.org