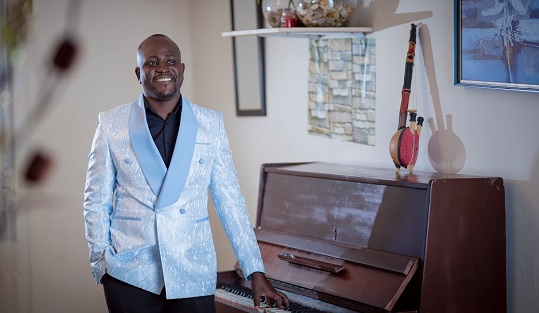 Yet, when it comes to the selection of a future career, most parents in our part of the world covet for their children the so-called A-list of professions such as a medical doctor, accountant, engineer, pilot, lawyer, architect, among others.

As a result, those who want to go into the creative arts, for instance, are prevented simply because predominantly, parents believe that areas such as music do not really pay. While Ghana boasts of successful traditional and popular music acts, perceptions about the non-viability of music as a sustainable profession remain. Others, spooked by media stereotypes, have the perception that musicians can be wayward. The philosophical aspects of music and its cultural ramifications are often lost on most people.

Despite this notion, when young Patrick decided to go into music as a child, his parents did not dissuade him. Rather, they gave him their blessings, and today, Patrick Alfred Addaquay is a well known and celebrated keyboardist who has performed with distinguished musicians in Ghana and across the world.

He wears a lot of hats in music: he is a Ghanaian classical/art keyboardist, composer, arranger, conductor, choral director and singer.

He recently obtained a new hat, an academic one, for that: Doctor of Music (Music, Theory and Composition) from the University of Cape Coast in the Central Region.

Dr Addaquay, as he is now known, told The Mirror he has been in music for the past 26 years and for him, music has been his life.

According to him, he started playing the keyboard as a hobby without really reading about it during his studies at the Kwame Nkrumah University of Science and Technology (KNUST) Primary and Junior High School.

He said while in Class Six, his music master who was a popular composer in Kumasi called A.E. Amankwah had to conduct a musical event. As a result, he needed someone who could play the keyboard. A childhood friend of his called Nana Ampem told their teacher he (Patrick) could easily do it.

“I remember that day I was in Mathematics class and was invited by Mr Amankwah to play. Immediately I played, he was very happy and he assembled all the choristers in the school and I played the popular gospel tune ‘Yesu ka wo ho’ with them.”

“Our Headmistress, Mrs Theodosia Jackson called me and said she had seen a potential in me so I should ask my mother to come and see her. I passed on the message to my mum and she came to the school. It was there Mrs Jackson told her I could be a great musician in future so she should give me the chance,” he recounted.

Even as a child, young Patrick was well-known in Kumasi because he often played the keyboard at the Wesley Cathedral which was then one of the biggest churches in the Garden City and also performed as a guest keyboardist with the Winneba Youth Choir.

Music in school
From KNUST JHS, he proceeded to the Mfantsipim School at Cape Coast and that was the first place he was exposed to formal music. “At Mfantsipim, I was mentored by Peter Lyte Koomson who later became the District Chief Executive for Ajumako District. I pursued General Arts with Music,” he explained.

He was appointed the school's junior organist while in Form One and later became the school's principal organist. From 2001 to 2004 he entertained students and teachers of the school with his musical talent in such a way that he was always a topic for discussion by students, parents and old boys of the school.

“At Mfantsipim, I started playing during church service, and because of this, the guys who often loved to go out and not attend church service started attending church service just to see me play. This also made some of the old students to donate instruments to the school,” he recalled.

He received several music prizes and was awarded the Discovery of the Year 2002 by the school. He was the first recipient of the award. In 2003, he received the "Initiative and Drive" award for his keyboard performances.

Due to his passion for music, he sat for the Senior School Certificate Examination (SSCE), writing a paper in Music, and had an excellent grade. At the university, he pursued a Bachelor of Arts in Music.

He later went for a Master of Philosophy (MPhil) in Music and recently completed a four-year doctorate (PhD) in Music, Theory and Composition all at the University of Cape Coast respectively.

“I started my PhD in 2016 and it took me three years to submit my thesis and got my certificate in the fourth year which was just this March. Because of the COVID-19 pandemic, we couldn’t have a formal graduation ceremony but it is all good. The important thing is that we have life,” he pointed out.
Asked what his Thesis was all about, Dr Addaquay explained that the title was “Sanku Concerto” which is a solo instrument backed by an orchestra (concerto).

“In my case, the instruments were African percussive instruments and Sanku (piano) concerto in African idioms. The basic rhythms used were ‘gabada,’ a type of music from Northern Volta, ‘adowa’ from  Twi, ‘kpanlongo’ from Ga, making the work a three-movement concerto,” he explained.

He further explained that the instrument for the orchestra included the ‘kidi’, ‘kagan’, ‘atumpani,’ ‘dawuro’, among other African instruments which were structured into the 20th Century compositional techniques.

Dr Addaquay composed his first oratorio, comprising 32 classical music pieces, in 2006, at the age of 20; it was called "Laudate". The two-hour oratorio, performed before an audience at the University of Cape Coast Auditorium, was the first of its kind in Ghana in 2005.

His compositions include a cantata titled ‘Afe Nsakrae’ and ‘Sonata kyekyekule’.  In 2016, Addaquay revised his first oratorio and called it the ‘Laudatur Christus’ and performed it in front of a live audience at Covenant Family Chapel in Accra. Included among the audience during the performance was Ghana's President Nana Addo Dankwa Akufo-Addo. As well as playing his compositions, he plays pieces from both local and foreign composers during his performances.

Dr Addaquay has also partnered corporate institutions to entertain Ghanaians and other nationals at various concerts.

Dr Addaquay was born to Mr Alfred Addaquay and Mrs Patricia Addaquay on September 17, 1985. He is the last of four siblings and married to Mrs Cynthia Christine Addaquay. They have two children.

When asked if he has any regret for pursuing music as a career, Dr Addaquay said: “My only regret was when I was growing up and how people treated musicians with disrespect. But as I was growing up, I changed my mind and told myself I would make it to the top.”

Dr Addaquay has decided to go back to the university so that he can impart all that he had learnt to students who aspire to follow in his footsteps.