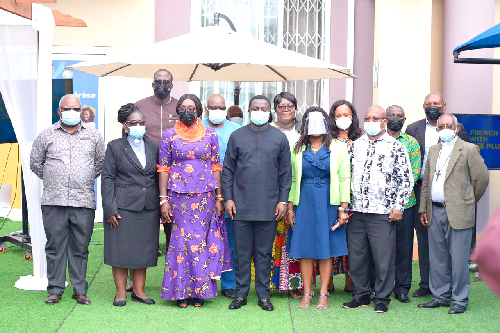 The two deputy ministers of education, executives of Ecole Thérèse and some dignitaries during the inauguration of the institution
30.5k Shares

We all want the best in life, for ourselves and for our children and that is why quality education is a value we must uphold.

The need for a greater focus on French tuition is progressively being felt in our schools and in business collaborations. To quote President Nana Akufo-Addo, “Ghana is an English-speaking island in a French ocean,” literally, Ghana is entirely surrounded by French speaking countries.

As such, children in Ghana should have a strong command not only of English but of French as well in order to have a broadened horizon and access to more opportunities internationally as they grow.

Adult professionals also need to be proficient in the French language to be competitive globally, occupy international positions and deepen business collaborations internationally.

Facts to note about French Language:

From a recent study by the ‘Organisation Internationale de la Francophonie’ - OIF, (the community of 84 countries which share the official use or teaching of French), there are currently 300 million people worldwide who speak French across five continents, with an overwhelming majority in Europe, Africa and North America.

With the establishment of the African Continental Free Trade Area, (an arm of the AU creating one common market for the entire African Continent),the French language has become non-negotiable for professionals.

Rev John Ntim Fordjour, Deputy Minister of Education, delivering a keynote address during the inauguration of Ecole Thérèse on August 20, 2021 at East Legon

Ecole Thérèse is a two-tiered Bilingual (French & English) institution that uses innovative and results-based approaches to address the needs of its clients.

Others were local and international partners in education, EMCLLC USA, EFFORD Ghana, Representatives of Ecobank and of GT Bank, other sister international schools, representatives of France Volontaires of the Embassy of Guinea and of the French community in general, the clergy of the Methodist and Anglican churches, the Mfantsiman Old Girls’ Association (MOGA 88 and 90), as well as other dignitaries.

Launching Ecole Thérèse on behalf of the Minister of Education, Dr Yaw Osei Adutwum, a Deputy Minister of Education, Rev. John Ntim Fordjour, demonstrated a great admiration for the initiative, underscoring the government’s support for the advancement and deepening of French Education in Ghana.He outlined some of the efforts being made by the ministry as of 2018 to promote the learning of French in the country, which includes the creation of the “Francophonie Affairs Secretariat” and the assistance it offers to the ministry and to a number of schools in the country.

Mrs Theodora Wood, the Head of the Institution, sharing the vision of Ecole Thérèse. With her are Rev John Ntim Fordjour and Ms Gifty Twum-Ampofo, two deputy ministers of education, Mr Frank Wood, the Chairman of Ecole Thérèse, and Mr Henry Wood, Chief Director, Office of the President

The school runs an international curriculum and is dual-streamed i.e. it runs a French stream distinctly from an English stream.  Ecole Thérèse has been duly licensed by the National Schools Inspectorate Authority (NaSIA).

Collaborations & Partnerships:  Ecole Thérèse supports other schools in French education by running an after-school support programme for their pupils and students.

Tier two: Ecole Thérèse PLUS in response to an established need, offers interactive and need-based tuition to professionals and corporate bodies delivered through seasoned adult education experts. This programme is structured to address the specific needs of each client.

Introducing Practical French on the Go as a Business Enabler Programme, the Head of the institution, Mrs Theodora Wood, a seasoned bilingual Learning and Development Expert, stated that beneficiaries of this flagship programme, currently staff of Pan African institutions, have attested to a better grasp of the French language and enhanced collaborations with French counterparts.

This, she said, will lead to greater confidence to explore international business opportunities as well as contribute to deliver creditably on region-based and continent-based projects.

Ecole Thérèse offers its services as virtual, in-person or hybrid programmes, as per clients’ preferences.

Ecole Thérèse has registered the Sunrise Foundation as a vehicle to offer much needed tuition in areas such as: French, Mentoring and Coding to children of identified orphanages.  The goal is to open up a world of opportunities to these children and empower them to work hard to achieve their dreams and a brighter future.

Initiation has been successfully carried out with two orphanages on a pilot project, i.e.the Rafiki Village at Gyahadze, near Winneba and the Motherly Love Orphanage at Kwabenya, Accra.

Needs assessment has been carried out and a curriculum has been drawn for both orphanages.The needed preparation is being made to deliver the structured education plan to these orphanages. Ecole Thérèse welcomes other companies to partner on this initiative.

Ecole Thérèse is serving the community in a full-circle and could be reached on any of these numbers and contact details below.