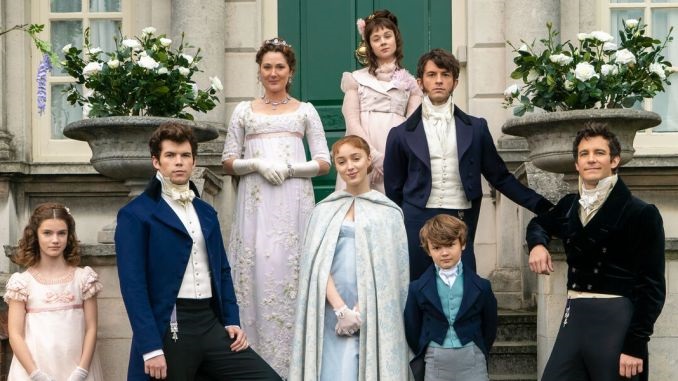 Some of the cast of Bridgerton

Netflix has just claimed its biggest hit ever with "Bridgerton," a drama set in Britain in the early 1800s.

Some 82 million households watched the drama, based on novels by Julia Quinn, in its first 28 days, Netflix (NFLX) said in a statement on Wednesday.

The company also claims that the show has "made the top 10" in each of its markets except for Japan, and has hit number one status in 83 countries, including the United States, United Kingdom, Brazil, France, India and South Africa.

The Regency-era romance drama, created by Chris Van Dusen and produced by Shonda Rhimes, has created a buzz since it debuted at the end of last year.

Set in 1813 London at the end of Britain's Georgian era, it's easy to see how the show's sex scenes, scandal and period costumes would propel the binge-worthy show to success — and a second season has already been confirmed.

Read more: Why Netflix is a lifeline for African film-makers

"Bridgerton" has been likened to "The Queen's Gambit," in that it "defies tradition, and demonstrates that period dramas are not limited in scope or audience," Jinny Howe, vice-president of original series at Netflix, said in the statement.

"Chris Van Dusen and Shondaland's Regency reimagined isn't meant to be history. It's designed to be more lavish, sexier and funnier than the standard period drama — and that's what so surprised and delighted our members," Howe added.

Netflix said it now has more than 200 million subscribers globally, after adding 8.5 million in the fourth quarter of 2020, beating its own expectations.

But the streaming service typically keeps its viewership numbers a secret, and the company's data has been said to lack nuance and third-party verification. Media critics are wary of such self-reporting.

Read more: What Beyoncé’s ‘Black Is King’ Means for Disney Plus

The company also faces stiff competition from its newer rivals. 2020 was a huge year for streaming, with the launch of new services like NBCUniversal's Peacock, Discovery+ and HBO Max from CNN's parent company, WarnerMedia.

Still, Netflix seems unfazed by the proliferation of rivals — even as Disney+ racked up more than 80 million subscribers.

Netflix last week noted that, even though Disney+ had a "massive first year," Netflix still "recorded the biggest year of paid membership growth in our history."