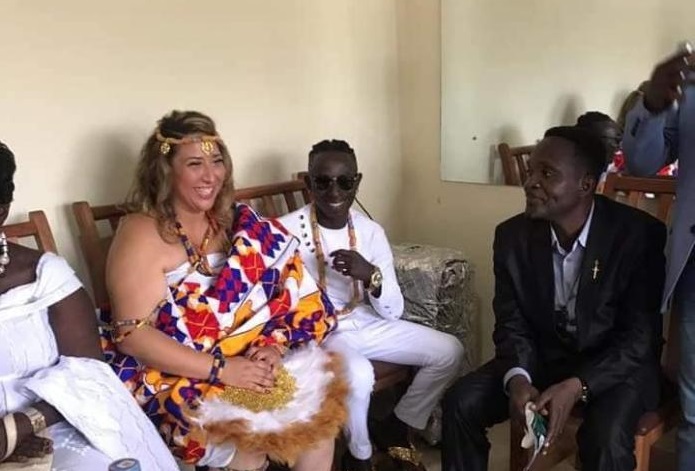 Patapaa and Liha Miller at their traditional marriage

One Corner hitmaker, Patapaa has explained why he chose to get married to a German wife and according to him, it is because every woman is the same.

Patapaa and his German wife known as Liha Miller, tied the knot on Saturday, January 2, at Agona Swedru in the Central Region and while it stirred excitement on social media, there were some who asked questions about why he did not marry someone from Ghana.

And in an interview with Loops Gh TV after the wedding, he explained that though there were lots of women he could have chosen from, he chose Liha because irrespective of where she comes from, every woman is the same and they all carry the same body parts.

Click on the link to watch his response: https://townflex.com/why-patapaa-married-german-lady/

Patapaa and Liha met on his European tour in February 2020, and have been together since then.

On December 31, the couple announced in a video on social media that they were getting married.

True to their words, they tied the knot on Saturday, January 2, the couple started off with their traditional wedding that took place at Patapaa's house, followed by the white wedding and reception which later took place at the Cedi Lounge and Kitchen.

Patapaa, whose real name is Justice Amoah, gained popularity with One Corner in 2017. The song quickly became a hit not only in Ghana but abroad especially for its dance moves which some people described as obscene.

He revealed that he was able to build his own house from the song which was nominated in the Most Popular Song of the Year and Song of the Year categories at the 2018 Vodafone Ghana Music Awards.