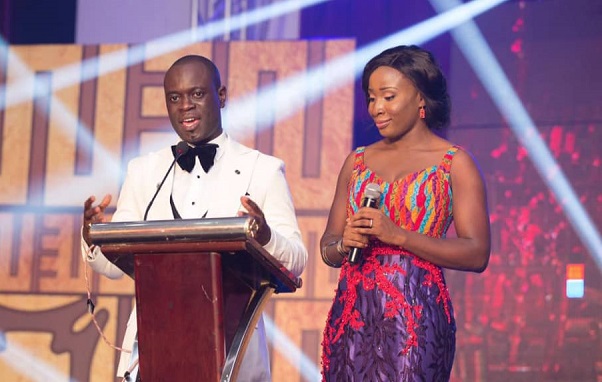 Media personalities Nathaniel Attoh and Naa Ashorkor Mensah-Doku have been announced as the hosts of this year's edition of the Exclusive Men of the Year (EMY) Africa Awards which will come off on Saturday, July 4.

The event, organised by Carbon AV with production support from Rhythms Africa, celebrates its fifth anniversary this year and coincidentally the first edition was hosted by Nathaniel and Naa Ashorkor.

This year, the EMY Africa Awards goes virtual, like many others that have been affected by COVID-19 and the ban on public gatherings and will air on Joy Prime and Joy News as well as all EMY Africa social media platforms.

Virtual or not, Nathaniel Attoh, who has hosted some of the biggest events in the country including the Vodafone Ghana Music Awards (VGMA), Miss Ghana @ 60, Miss Universe Ghana, Rhythms on Da Runway Year of Return edition and many others told Graphic Showbiz he would give off his best like he always does.

"I have been a part of this from the very word go because I believe in the central ideal of celebrating men for their achievements and efforts they are making to make society a better place.

"I have been very much part of this in terms of the planning process and I am always glad when I see people walk up on stage to get recognised symbolically for what they've done and the impact they've made.

"We live in a world where men are often not appreciated for what they do. Mother's day, for instance, is celebrated more greatly than Father's day so the idea is also to mark father's day and to encourage men to do more and put the society on their shoulders.

"As a host, my utmost aim is always to ensure that my audience has memorable moments at every event. Saturday will be number four out of the five and I'm very grateful for the opportunity to always share the space and those great moments.

"It's always a good thing to celebrate greatness from our continent of Africa. I'm glad and I'm looking forward to having a great time at our virtual event as we are not in ordinary times," he said.

The EMY Africa Awards recognises and celebrates the achievements of men in our society across diverse spheres including local industry, community, culture and public service.

Last year, businessman and philanthropist, Dr Ernest Ofori Sarpong, was honoured as the Ultimate Man of the Year.