More hope for Dancehall at Stonebwoy's Bhim of Hope concert 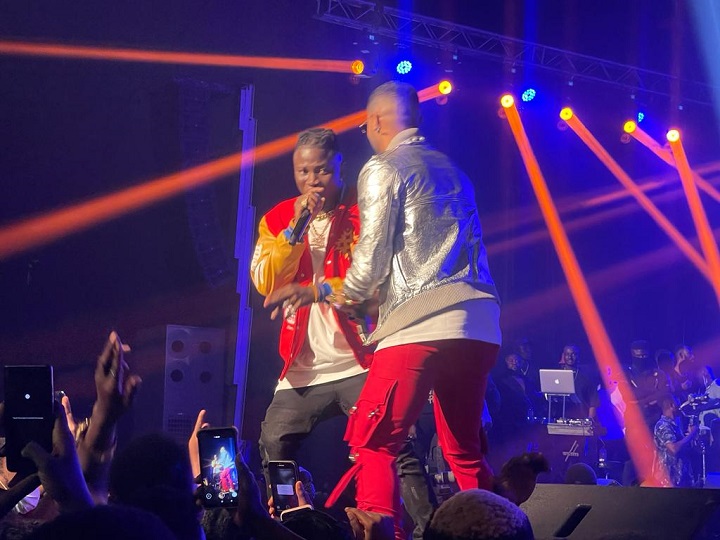 Stonebwoy was a class act on stage
30.5k Shares

It is not for nothing that Stonebwoy is celebrated as one of the artistes pushing Dancehall music in Ghana.

On Tuesday, December 21, Stonebwoy made a strong case for the genre with a wonderful showing at his Bhim Concert which came off at the Grand Arena of the Accra International Conference Centre (AICC).

Clad in all-white attire to perhaps signify victory, Stonebwoy took patrons through some of his songs such as Tomorrow and I'm A Hero, which reflected the theme of the concert "Bhim of Hope." However, the tempo changed when he performed some of his old songs back to back and those were sweet moments for the patrons as they were taken down memory lane with songs such as Bawasaba and Go Higher and it was no surprise that they sang the songs word for word.

The 2015 VGMA Artiste of the Year winner has established himself as a great performer and for the over two hours that he was on stage, he sustained his high energy. Gelling perfectly with some of the artistes he's collaborated with including US-based Ghanaian artiste Vic Mensa, MzVee, Darko Vibes, Hajia4 Real, Joey B, Stonebwoy delivered a solid performance on the night.

Stonebwoy and MzVee performing together

Beenie Man
Jamaica is home to Dancehall music and Beenie Man didn't have to do much to prove his music roots. Even though he didn't sing many songs on stage, the Jamaican music icon complemented that with his high energy and stagecraft.

With patrons cheering some of his antics, Beenie Man mentioned that he was always proud to be in Ghana since history has it that Jamaicans trace their roots to Ghana. He encouraged people of the Black race to be united in love to fight for their common goals.

Highlights
One of the major highlights was when Samini joined Stonebwoy and Beenie Man on stage. He was not publicised to perform at the show but that didn't prevent Samini from putting up an electrifying performance with many songs.

Stonebwoy, Beenie Man and Samini on one stage is one that Dancehall lovers will cherish.

Even though his time on stage was short, the presence of Samini will live on in the minds of patrons and the freestyles by him, Stonebwoy and Beenie was everything that Dancehall music followers will forever cherish.

He may not be featuring on the music charts but rapper Kwaw Kese proved he is still the people's man when he came on stage with the loud cheers from patrons nothing short of deafening. Singing some of his old tunes like Let Me Do My Thing and No More, Kwaw Kese rocked the stage.

Being the first artiste to perform live with the band before Stonebwoy at the show, Nyedzilo hitmaker Edem had an easy time driving the audience to the peak before exiting the stage.

This year's event is the fifth edition of Stonebwoy's Bhim Concert. Even though the show ended on a good note, the event seemed to be dull from the beginning perhaps due to the inability of DJ Faculty and the then host to ensure the right atmosphere and energy.

However, that changed when Jay Foley took over as the host and energised the auditorium with his 'twerking sessions" where he called some female guests to come and dance on stage.

Apart from the late start of the show at about 10:30 p.m. which dragged into the dawn of Wednesday, some underground artistes who looked very lost on stage, this year's concert was great.