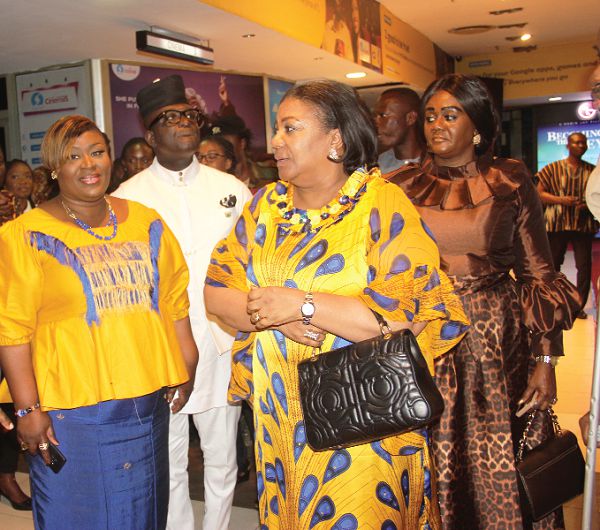 A movie which seeks to help people embrace life, cast aside their fear of death, find a better way to deal with challenges and discover a path to greater happiness, joy and fulfillment has officially been premiered in Ghana.

Titled Becoming the Keys, it features some renowned international figures such as Kathryn Brinkley, an astrologer; Dannion Brinkley, an author and speaker; Juliette Miles, speaker and life coach; Jim Philips, Business leader; Mona Lisa Brookshire Nee Blay- Miezah, a General Management Executive and the producer of the movie among many others.

The movie which was premiered recently at the Silverbird Cinemas at the Accra Mall, attracted a number of personalities including the First Lady, Mrs Rebecca Akufo-Addo and the Minister for Tourism, Arts and Culture,Mrs Barbara Oteng-Gyasi.

The movie revolves around a newly appointed spiritual guide called  Elizabeth who sets out on a mission to help people get through their challenges and find happiness.

These people are sent to experts who share their experiences and challenges to inspire and empower them to reclaim their life and all the blessings they hadn’t realised.

The featured experts and their dramatic stories encourages viewers to embrace the keys to a happy life.

Explaining the  movie, Mona Lisa Brookshire Nee Blay- Miezah, who is the only Ghanaian in the film said it stresses on the seven elements namely, appreciation, harmony, passion, faith, courage, vibration and empathy to attain success in life.

She urged people to watch the movie as it was going to inspire them to achieve any goal they had set for themselves.

Miss Blay-Miezah added that the movie had been premiered in different countries across Europe and America and had realised the huge impact it was making in people’s lives.

“And then I realised that when I bring it to my country, it would touch the lives of many people, it would make them believe that life has got the best things to offer them,” she added.