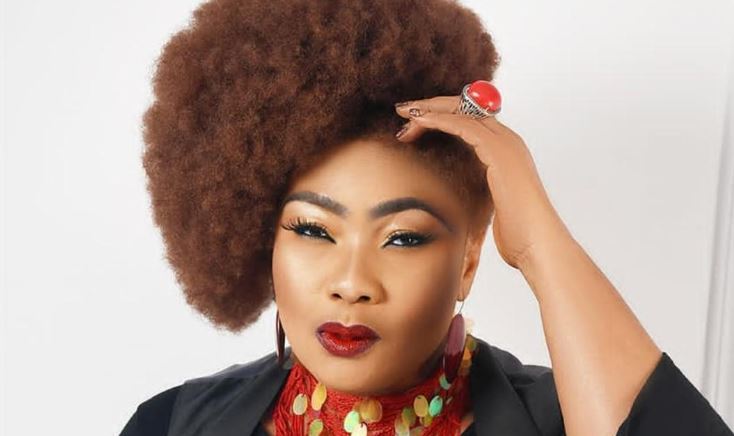 Veteran Nollywood actress Eucharia Anunobi has descended heavily on all who oppose sex before marriage, calling them names and concluding such people are out of their minds.

The 56-year old screen diva who recently announced her longing for a husband says it makes no sense that two people would tie the knot without first testing if they are good enough for each other.

Arguing her sex-before-marriage case out in an Instagram video which has since found its way onto Tik Tok, Eucharia said proponents of the no-sex-before-marriage position could possibly be people whose libido is ‘dead’ and as such have no sex drive who want to impose their uninspiring lifestyle on the rest of society.

Interestingly, Eucharia who is also an evangelist puts in a sidebar, three Bible quotes (2 Timothy 2 : 22 , 1 Thessalonians 5 : 22 , James 4 : 7) that enjoin high morals, and says “Sex Before Marriage (premarital sex) makes it thoroughly difficult for you to extricate yourself from the Web and Strangle hold of an incompatible partner.”

“What’s this whole noise about no sex before marriage? How can someone, how can anyone, say that someone should not indulge in sexual activity with someone who has already proposed?

“I mean, I don’t understand. The proponents of this whole wicked agenda of no sex before marriage must be completely out of their minds. Yes, If they are not out of their minds, how can they recommend such a wicked thing?

“OK let me ask, ask this question. How do I get to know if my intended is good in bed?” She asked as she wiggled in the video.

“I think I know the answer. I know the answer to the wickedness that lies in the heart of proponents of this wicked principle. They are castrated eunuchs, they are eunuchs and frigid females, yes, if they are not eunuchs and frigid females how can they try to impose their dryness, their dry life upon the lives of others?” she quizzed as she laughed.

“Oh yes I think their libido, libido is dead. Yes, their sex drive has gone down to zero that is why they will say that we that are hot blooded should be like them. But we can’t be like them. How can they think that we can be like them not to have sex with someone that I’m completely and sexually attracted to? I mean someone has already proposed to, I have proposed to marry a lady, and someone says I should not get to know her? No, no, no, something is definitely wrong with these people. They are not of this world, because if they are of this world they will understand that it is not easy to stay, I mean looking at someone that you are attracted to and not go under the sheets.”