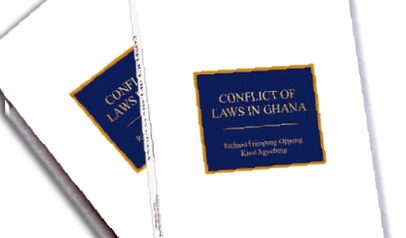 Generations of Ghanaian law students, scholars, legal practitioners and judges have engaged with conflict of laws issues in their respective capacities. Regrettably, they have not had access to an authentic Ghanaian treatise on the discipline — a treatise foregrounded in Ghanaian case law and legislation.

They have had to rely on foreign treatises (often very dated editions) mainly written by reputed English scholars. Richard Frimpong Oppong and Kissi Agyebeng, both my former students at the University of Ghana, should be commended for filling this void in the scholarship on Ghanaian law with their sophisticated and skilfully executed work of scholarship: Conflict of Laws in Ghana.

Ghanaian legal practitioners and judges have increasingly been called upon to deal with transactions and claims that involve foreign elements — the quintessential locus of conflict of laws problems.

While deferring all matters of substance to the rich and wide-ranging content covered in the pages of this book, I wish to highlight several other important features of the book.

First, the book traverses all the traditional legs of conflict of laws, namely the rules on jurisdiction when a claim involves a foreign element, choice of law, the enforcement of foreign judgments and arbitration awards.

It also covers international civil procedure, including the international aspects of serving legal documents and taking evidence. These procedural matters are not usually covered in standard texts in the discipline but are nevertheless critical to the application of the substantive principles.

Second, the book exposes the need to develop Ghana’s conflict of laws regime as a matter of urgency, since there appears to be little or no jurisprudence on significant conflict of laws questions.

Similarly, the law that governs a tort claim that involves a foreign element, the recognition of foreign adoption orders, the jurisdiction of the courts to enforce foreign non-money judgements, to mention but a few, remain uncertain.

The courts can undoubtedly develop these areas of the law incrementally as and when suitable cases come before them. Alternatively, as has been done in several common law jurisdictions — the most recent one being New Zealand’s Private International Law (Choice of Law in Tort) Act 2017 – legislation may be enacted to address these issues and provide much-needed certainty in the law.

Third, the book chronicles the need to reform various aspects of Ghana’s conflict of laws regime. It provides no less than 20 recommendations to address the issues identified.

These include proposals (i) to reform the common law rule that a child acquires the domicile of the father at birth, if legitimate, and the domicile of the mother at birth, if illegitimate; (ii) to adopt the lex loci delicti rule as the governing law of international torts; (iii) to reform the rules on the jurisdiction of the courts in matrimonial causes; (iv) for the President to designate more countries whose judgements can be registered in Ghana; and (v) for Ghana to become party to various conflict of laws related to international conventions developed under the auspices of the Hague Conference on Private International Law such as the Hague Maintenance Convention and the Hague Child Abduction Convention; the Choice of Court Convention; and the recently adopted Foreign Judgements Convention.

A growing number of African countries have recognised the value of membership of The Hague Conference on Private International Law, the world organisation for cross-border cooperation in civil and commercial matters that currently has 88 member states, including all of Ghana’s major trading partners.

This work thus makes a strong case for Ghana to consider becoming a member of this organisation, and not merely a party to its conventions.

Finally, the book shows the benefit of internationalism, comparativism and the comparative method. Although foregrounded in Ghanaian case law and legislation, the book draws on materials from sister African and other common law countries such as Australia, Canada, New Zealand and the United Kingdom.

It also discusses various international conventions relevant to the discipline, including those to which Ghana is not yet party to.

Future reform of Ghana’s conflict of laws rules, whether through case law or legislation, would benefit from the jurisprudence and comparative legislation of these common law countries, as well as ratification of relevant international conventions.

Judges, legal scholars, legal practitioners, law students and, indeed, all who operate in the international legal terrain, must take notice of this comprehensive work.

The range, depth and originality of Conflict of Laws in Ghana make it a must-read for anyone confronted with a conflict of laws issue in Ghana. They will find much value in doing so.