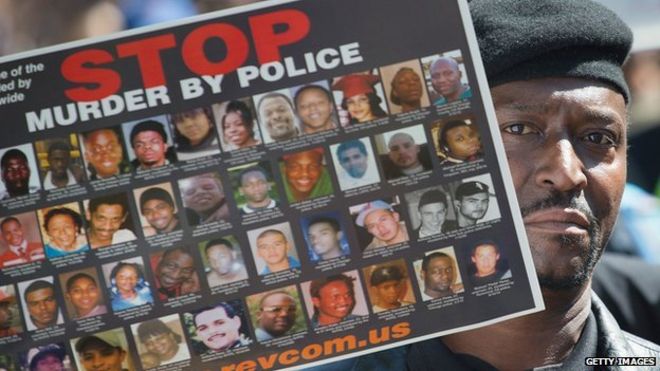 Alicia Keys, Beyoncé and a group of other celebrities describe 23 ways a black person could be killed in the U.S. in a new video that urges Americans to sign a petition that calls on Congress for “radical transformation,” including funding for healthcare, education and criminal justice reform.

The nearly two-dozen musicians and actors, including Chris Rock, Rihanna, Taraji P. Henson and Pharrell Williams, use real-life incidents to highlight the various ways black people have died in the country.

The video, a collaboration between Mic.com and the We Are Here movement, begins with Keys saying, “failing to signal a lane change,” when referring to the death of Sandra Bland, who last summer was arrested during a routine traffic stop in Texas and later died in police custody. Her death was ruled a suicide.

The deaths mentioned in the video also include the recent fatal police shootings of Alton Sterling and Philando Castile, alongside the other high-profile killings of Trayvon Martin, Eric Garner, Freddie Gray, Tamir Rice and the nine black people shot dead inside a Charleston church last year.

“The time for change is now,” Keys says at the end of the video. “We demand radical transformation to heal the long history of systemic racism so that all Americans have the equal right to live and to pursue happiness.”

The petition specifically asks for the government to direct $150 billion toward education, healthcare, housing, employment and nutrition in “poor communities” over the next decade, as well as an “overhaul” of the criminal justice system.

MIC ORIGINAL: 23 voices — Alicia Keys, Beyoncé, Chris Rock, Rihanna, Taraji P. Henson, Pharrell Williams and so many others — reveal a shocking truth: These are the #23ways you could be killed if you are black in America. The time for change is now.