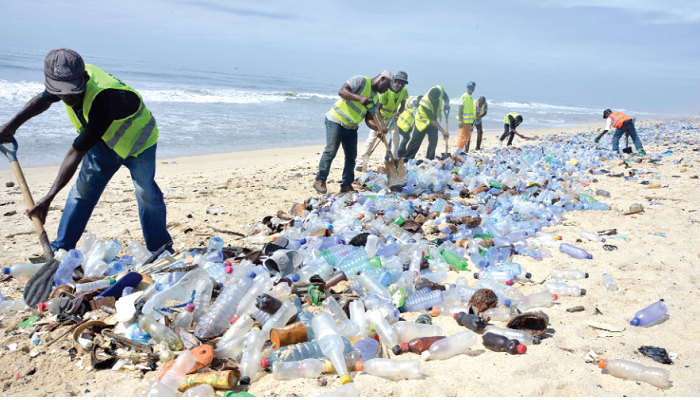 The plastic waste menace calls for global action to address the situation and find a lasting solution to it.

The fight against plastic waste is aligned with the Sustainable Development Goal 11, which talks about sustainable cities and communities.

Therefore, managing plastic waste is a giant step forward for the development of any country. Figures available indicate that the average annual global plastic production from 2010 to 2020 was 322 million metric tonnes.

It is a fact that plastic is not just a nuisance; there are actually a number of benefits we derive from it. Ghana imports $2.58 million tonnes of plastic annually because of its high demand.

However, a study shows that over 70 per cent of plastic products are single use, the reason plastic waste is generated within a short time.

Since we have little knowledge about managing plastic waste, it turns to become a nuisance in our homes and industries.

It is thus exciting that the Council for Scientific and Industrial Research (CSIR) and the Association of Ghana Industries (AGI), through the Ghana Recycling Initiative by Private Enterprise (GRIPE), have launched a contest on plastic recovery among students.

The intent of the contest is to introduce and promote the circular economy of plastics in three selected schools in the Greater Accra Region.

It is also to help reduce the cost of solid waste management in the participatory schools, while at the same time empowering the youth with skills to become the next change makers in the plastic value chain.

The Daily Graphic applauds the initiative and wishes to urge the organisers not to remain with only the three schools but upscale it to eventually cover all second-cycle schools in the country.

It should even be possible for basic school children to be included; after all, it is said that the best way to entrench an idea is to begin with children.

The mantra is ‘catch them young’, and for us, this is a laudable initiative towards achieving President Nana Addo Dankwa Akufo-Addo’s cleanest city agenda.

Undoubtedly, the systematic and organised recovery of used plastics is key to the sustainable management of plastic waste in the country.
The school contest project exposes us to the numerous economic benefits of plastic waste.

We believe that introducing the circular economy of plastic to children is a first step towards reducing, reusing and recycling the plastics we generate on a daily basis.

Introducing effective plastic waste management in schools by making it a critical part of the curricula, from pre-school to the tertiary, will not be too much to ask because that is a positive step towards containing plastic waste in the country.

It is really encouraging that the fight against plastic waste has been taken to schools through innovations to turn the waste to wealth; we urge the organisers to work hard to recycle as many used plastics as possible.

We are happy that SESA Recycling Ltd and Trash Connect have offered to be part of the project. We charge other companies, especially those in the recycling business, to throw their weight behind the contest to sustain it.

In this wise, the CSIR and the AGI cannot escape mention for teaming up to come up with such a laudable project.

With concerted effort, the fight against plastic waste is sure to be won.