Restoring confidence in the economy 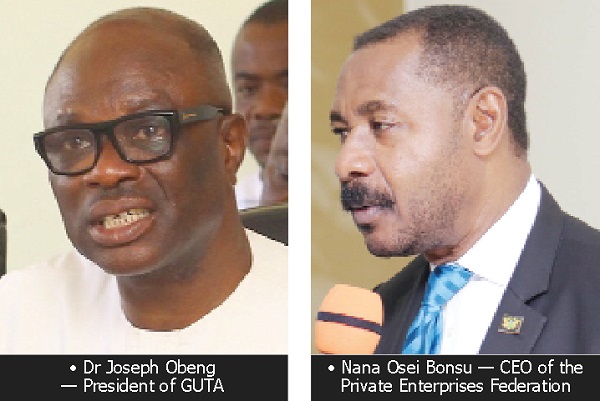 On the front page of yesterday’s [November 1, 2022] issue of the paper, we reported that members of trade and business associations had started high-level discussions among themselves on how to carry through some of the President’s requests for support to revive the economy in the short term.

The report said members of the Association of Ghana Industries (AGI) had been locked up in discussions on how to ramp up the production of some essential products, such as vegetable oil, rice and poultry, in response to the President’s call for local substitutes.

It said discussions among members of the Ghana National Chamber of Commerce and Industry (GNCCI), on the other hand, were on how to increase exports from the country in order to rake in foreign exchange, while the Ghana Union of Traders Association (GUTA) was also impressing on its members how to stem the increasing prices of goods and services resulting from the economic crisis.

According to the report, the leaders of the associations said their meetings, which were being held nationwide, started less than 24 hours after the President’s broadcast to the nation on the state of the economy and the need for all to support efforts to steer the economy out of the crisis.

The Daily Graphic finds these interventions by trade groups and business associations very timely and proactive. This is because this collective move potentially will mark the turning point in the economic crisis the country is facing.

Fortunately, all the stakeholders are speaking with one voice, have rolled up their sleeves and jumped into the trenches to seek solutions to the current economic malaise in the short time.


Looking at the unprecedented levels which our macroeconomic indicators have reached, this is not the time to look on askance and play the blame game.

At the micro level, the prices of food staples keep increasing at a pace with which the average Ghanaian is struggling to keep.

The price of fuel has hit historical levels, to the point where public transport fares have more than doubled in recent months, helping to exacerbate the situation.

And as if that is not enough, some unpatriotic traders whose consciences are seared are taking advantage of the situation to astronomically increase the prices of their wares, without any compassion for their fellow human beings.

In spite of all of these, the Daily Graphic is hopeful that the country will soon come out of the woods. Our optimism is predicated on the grounds that the trade groups and business associations have covered since they began engaging the government.

For instance, engagements among stakeholders in the manufacturing sector have led to the listing of products manufacturers can produce in the short term, and that the AGI is mapping out companies that can produce them immediately and conveniently for the local market.

We believe that with the active support of the government, the ministries of Finance, Trade and Industry and Agriculture and the banking sector, our local companies can easily manufacture and produce in sufficient quantities products such as rice, poultry, vegetable oil, toothpick, pasta, fruit juice, bottled water and ceramic tiles.

Currently, we find ourselves in a situation where time is of essence; therefore, we must see some form of action by way of moving into the production phase in order to bring about the needed price stability and the reversal of the economic downturn.

At this point, we support the government’s decision to restrict imports and encourage exports, for which reason there is the need to impose import licensing. An import licensing regime will enable importers to justify the need to import, instead of the free regime where traders bring in products over which the country already has a competitive advantage.

We of the Daily Graphic believe that this is the opportune time to take advantage of the current situation to correct some of the mistakes in the past that have worked against our local manufacturing companies, making them uncompetitive.

We also implore GUTA to embark on some advocacy to persuade its members and other traders to stop the hiking of the prices of products without any just cause.

We find ourselves presently in a situation where it requires the support of every Ghanaian to contribute his/her quota to restore the economic fortunes of our dear nation.