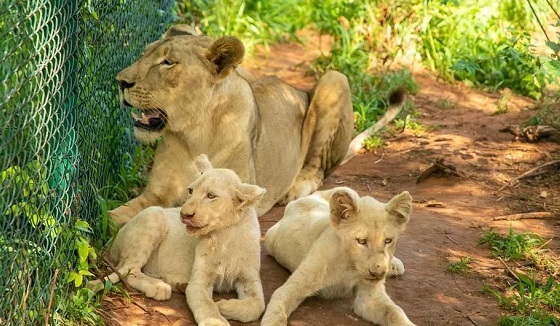 After almost four months of closure, the Accra Zoo has been reopened. The closure was due to the fact that a middle-aged man was allegedly attacked by lions after he had scaled the enclosure of the lions.

Long before the incident and the reopening of the zoo, work to upgrade the security of the facility had commenced.

Zoo authorities had started installing the electrical power supply at the facility. Installation of closed-circuit television cameras and camera traps, especially in the lions’ enclosure, to detect the movement of objects and people was also ongoing before the closure.

Currently the height of the outer perimeter has also been increased to 16 feet, while a third perimeter for defence has been created, with most of the cages renovated.

We are glad that finally the Accra Zoo is now open to the public and it’s good to see all these developments at the facility.

Without any doubt, zoos are crucial, not just for the conservation and protection of the ecosystem and biodiversity but also the provision of a safe space for endangered species and the creation of an enabling environment for them to reproduce, while also helping to promote eco-tourism and socio-economic development.

In countries such as South Africa, Tanzania, Kenya, Zambia and Rwanda, zoos are a major economic boost. In the United States, zoos and aquariums contribute not less than $16 billion to the economy. The Kenyan economy, for example, is said to have benefited by $4.2 billion from eco-tourism in 2020 alone.

That is why the renovations and additions at the Accra Zoo are in the right direction. But we believe we have the capability, as a country, to do far more if we really want to rake in the needed revenue as other nations.

The famous San Diego Zoo in the US has brought in such innovations in its management, such that it is able to make some extra money for the establishment. The zoo offers a range of opportunities that include memorial and tribute gifts, exhibition, sponsorship and wildlife financial adoptions. There is also an annual zoo gala fundraiser, with regular tickets for $350 and reserved seating tickets for as high as $600.

These are some of the innovations we can understudy, adopt areas of interest and replicate here to shore up revenues from our zoos.

As a country, it is rather baffling that we are too laid back. It must be instructive for us to know that nothing happens by chance. At times, many are tempted to believe that many of our primary actors in the effective management of our zoos are just lethargic or not hungry enough for success.

All in all, we are consoled that the Accra Zoo will live up to expectation, while ensuring that all the safety measures are in place for both visitors and the facility. We know many parents and especially children would like to visit the place. We, therefore, find it of utmost priority to put in place the necessary safeguards to prevent any mishap during this time when people are making merry. The work of wardens must not be taken for granted and the supervision of visitors must be paramount.

We see the plans to also upgrade the Kumasi, Tamale and Takoradi zoos, as well as establish new ones in the other regions, as progressive, but we must first implement structures that ensure the effective management of the existing zoos, which must be of best standards. It is only after doing this that we can effectively extend the zoos to the other regions.

It is heart-warming and a feather in the cap of the Forestry Commission for the collaboration among the Accra Zoo, the Wildlife Division, the Veterinary Services Division, the University of Ghana, the Cambridge University and the Institute of Zoology in the United Kingdom.

The commission must build upon this success and raise the standards of our zoos to the level that they can compete with others in other parts of the world, so that the country can rake in the benefits that zoos offer.