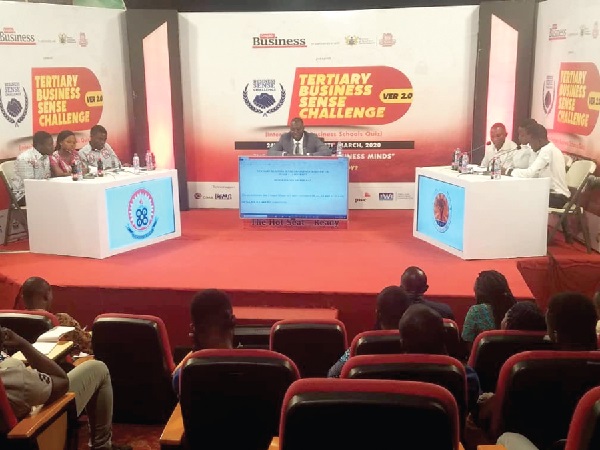 Representatives from the University of Education, Winneba (UEW) and the African University College of Communications (AUCC) during the contest.

The University of Education, Winneba, lived up to its mantra of "show them" in the second edition of the Tertiary Business Sense Challenge as it whipped the Africa University College of Communications (AUCC) to progress to stage two of the contest.

The UEW had a good start in the 7th contest of the stage one of the TBSC and maintained the lead through the various rounds of the contest. At the end of the 5th round, UEW progressed to the next stage with 56.5 points while AUCC scored 20.

In what could be described as a typical ‘father and son’ competition as the AUCC is affiliated to UEW, it was a clear case of dominance by the ‘father’.

The TBSC is organised by the Graphic Business in partnership with the Ministry of Business Development and the Institute of Chartered Accountants Ghana (ICAG) and is being held on the theme: “Developing Business Minds”.

The first round tested basic understanding of business principles by the students and UEW had a field day as AUCC struggled to keep up with the pace, failing to answer majority of their major questions correctly.

The UEW took an early lead in the first round of the contest with 10 points while AUCC lagged behind with three points.

In the second round, the AUCC managed to stage a slow comeback into the contest, but UEW maintained their lead position answering all their major questions. At the end of the round, AUCC had nine points while UEW had 17 points.

The third round focused on the problem of the day where contestants were given the same set of questions to calculate and provide answers.

UEW again showed class by getting their calculations right, earning all the 10 points allocated to that round. AUCC again lagged behind with three points after answering only the first part of the problem of the day. The AUCC team didn't attempt the second part of the question.

The euphoria in the room at this point was heightened as the supporters of UEW started chanting ‘show them.’

Both teams struggled to stay afloat in the first part of the fourth round which focused on questions from the Graphic Business newspaper. The second round focused on true or false questions.

In the fifth round, the UEW answered all the riddles correctly earning them eight points. AUCC failed to earn a point in that round.

Interacting with the contestants from UEW, Mr Samuel Mawuli admitted to their challenge in the fourth round although they came out as winners at the end of the day.

“Getting a hold on the Graphic Business questions was our challenge, however, we came out as winners although we wish we had hit the 65 high score,” he said.

He was, however, optimistic that the team was fully prepared for the next stage of the competition.

The AUCC team leader, Mr Joshua Borketey, said they were not winners because they were not abreast of the style of the competition but expressed the hope to come better prepared next year.