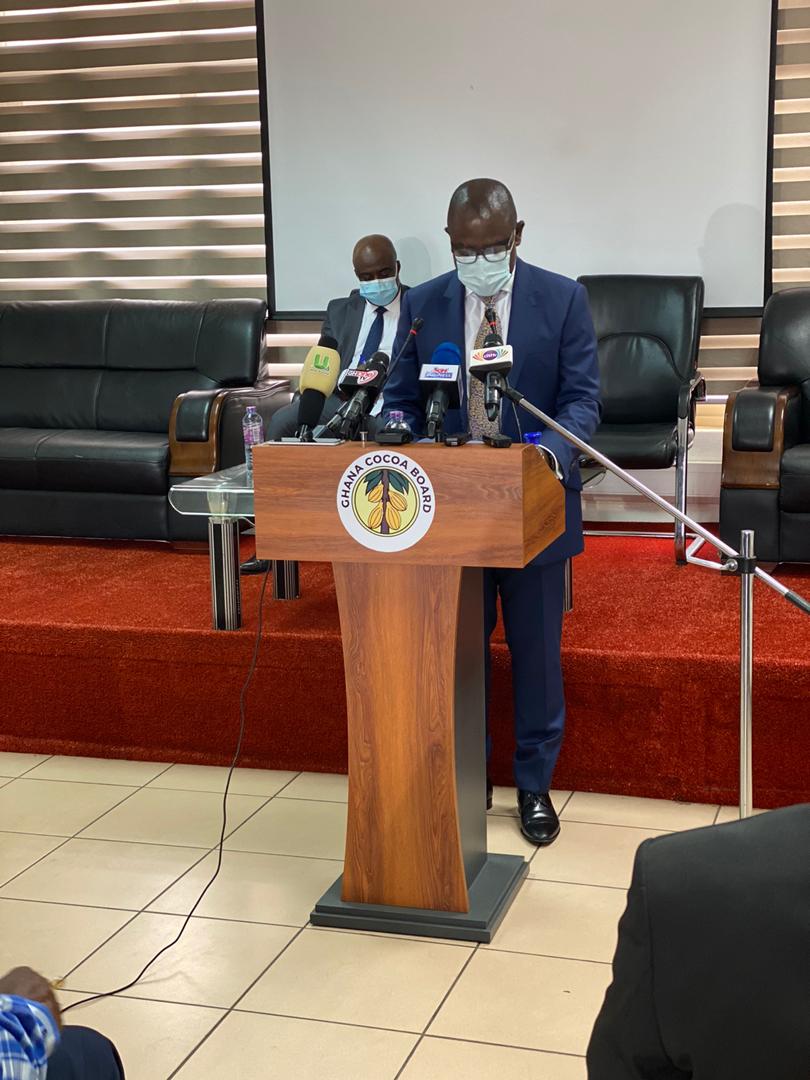 The Ghana Cocoa Board (COCOBOD) has resolved to surcharge all Licenced Cocoa Buyers (LBCs) culpable in tempering with weighing scales to cheat cocoa farmers.

Per the new sanctions, LBCs who are found to be cheating farmers will be made to pay the monetary equivalent of the aggregated weight from cocoa sheds across the country that the LBC in question may have short-changed the unsuspecting farmers, once the GSA confirms adjustment of such weighing scales.

Addressing the media on measures taken by the board, the Deputy Chief Executive in charge of operations at COCOBOD, Dr Emmanuel Opoku described the act by the LBCs as condemnable, lamenting that it counts among a number of challenges which have plagued the cocoa sector for decades.

He said it was an issue which the management of COCOBOD had already unraveled and already rolled out measures to address.

Dr Opoku also noted that the board was in the process of procuring electronic sealable weighing scales for cocoa weighing at the points of sales operated by the licensed buying companies (LBCs).

This scales, which were recommended by the Ghana Standard Authority (GSA), meet a set of tamper-proof standards and meant to curb the tampering of the mechanical scales presently used by the LBCs.

He said the introduction of the electronic scales would make scale adjustments a thing of the past.

He noted that the electronic scales would be distributed to the LBCs at a cost.

Dr Opoku said management of COCOBOD took the issue of weighing scale tampering very seriously and had on several occasions condemned the practice and similar acts, and at all times highlighted the consequential regressive impact they have on interventions that COCOBOD has put in place to improve the earnings and livelihoods of cocoa farmers.

He said the Joy FM documentary, albeit commendable, was nonetheless belated and did not shed light on the measures which have been taken to address the problem since 2018 when the film was produced.

“It is for this reason that we believe the general public could benefit from information on measures presently being implemented to deal with the problem permanently, and to ensure that cocoa farmers receive fair and deserving incomes for their work.

“Following a preliminary inspection tour of LBC sheds, led by the Chief Executive of COCOBOD in 2018, the management commissioned the Ghana Standards Authority (GSA) to perform a thorough inspection of all weighing scales used at LBC sheds (cocoa purchasing and weighing points) across the country. This was necessary to gather empirical evidence on the extent of the problem and to inform policy and strategic decisions,” he stated.

He said the board would continue to monitor their activities to ensure the effective implementation of such a measure to eliminate a systemic problem.

“The work of the media in shining light on the situation and improvement as we progress, as well as the vigilance of our field staff and the cocoa farmers themselves, will together play a crucial role in eliminating this cocoa canker.

“We are also confident that COCOBOD’s Farmer Data/Cocoa Information Management System, which is underway, when ready will improve overall monitoring of the supply chain including purchasing, weighing and grading of cocoa, enhance records keeping, allow the early detection and flagging of inconsistencies and anomalies in records and ease traceability. Detected issues can then be promptly addressed,” he stated