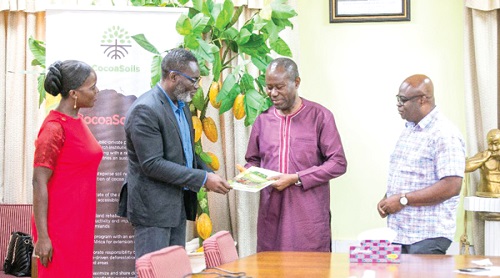 He explained that the cocoa trees that have been felled, as a result of the Cocoa Swollen Shoot Virus Disease (CSSVD), should rather be allowed to decompose on the farm in order to provide the needed nutrients to the newly planted cocoa trees.

Mr Aidoo made this known when Cocoasoils Programme, a public-private consortium, presented cocoa training manual and farmers’ handbook to COCOBOD in Accra on April 29. He insisted that leaving the felled trees to decompose would provide the needed soil nutritional requirements for new plants.

The government in September 2020 embarked on a programme to rehabilitate all diseased cocoa farms as part of the efforts to increase cocoa production in the country.

Under the programme, it will fell all cocoa farms affected by the Cocoa Swollen Shoot Virus Disease and replant and manage them for two years before giving them back to the farmers.

The government allocated over $200 million of the $600 million syndicated loan facility it secured from the African Development Bank (AfDB) to the national rehabilitation programme.

But Mr Aidoo stated that a recent fact-finding mission by the COCOBOD showed that the farmers had started harvesting the felled trees as firewood and selling them as premium to food vendors.

He said they sold the felled trees to kenkey sellers in Accra, Kumasi, Takoradi and Cape Coast.

“We have a whole landscape of cocoa farms that have been affected and we are rehabilitating because the CSSVD does not have any chemical solutions so we have to cut the trees and then replant them.

We recently paid a visit to the field and what we realised was that the trees that had been cut down were being harvested by the farmers as firewood so that they could sell them.

“I hear cocoa firewood is being sold in Accra, Cape Coast, Takoradi and Kumasi at premium to cook kenkey,” he said.

He, therefore, urged the farmers to desist from the act as the trees had taken a lot of nutrients from the soil and so, when they were cut down, they needed to be left so that they could decompose and provide nutrients to the soil.

Management of COCOBOD took delivery of cocoa training manual and farmers’ handbook designed to help address the declining productivity in cocoa and improve the livelihoods of farmers.

The documents on managing soil for increased productivity and decreased deforestation was made possible through Cocoasoils Programme, a public-private consortium, aimed at intensifying cocoa production through the development and dissemination of integrated soil fertility management recommendations to cocoa farmers.

The CocoaSoils Programme is a Norwegian Government-NORAD funded initiative, being implemented in Ghana, Cameroun, Cote d’Ivoire, and Nigeria.

The Coordinator of CocoaSoils Global Programme, Dr Richard Asare, observed that the documents were presented to COCOBOD in order to support cocoa extension services in the country.

He said partners of the CocoaSoils programme had set up core and satellite research for development trials to help provide site specific fertiliser recommendations across the four countries in West Africa.

He said the core trials were long-term trials of at least two hectares, where fertilisers were applied in different quantities and combinations, and responses in yield were being carefully measured.

He said in Ghana there were two core trials located at Mabang managed by Cocoa Research Institute of Ghana (CRIG) and the other in Boako also managed by CRIG with funding from Mondelez.