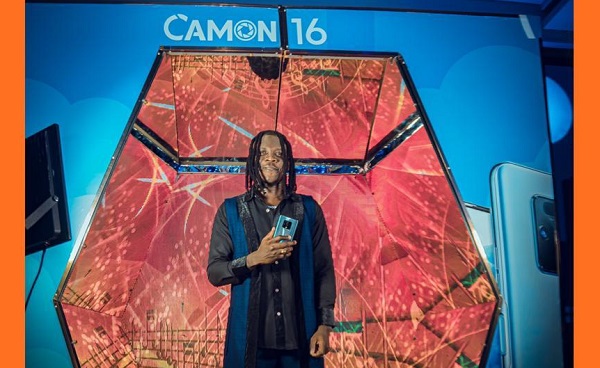 The brand ambassador of global mobile phone brand TECNO Ghana, Stonebwoy, has unveiled its new smartphone the CAMON 16 series which boasts an industry-first rear 64-megapixel quad camera and a front 48-megapixel camera to the Ghanaian market.

One of the main attractions of both phones is the trademarked TAIVOS™ technology (which stands for TECNO AI Vision Optimization Solution" which created an exceptional photo experience.

Explaining the TAIVOS™ technology which is used by the cameras of the CAMON series, TECNO Training Manager, Cyril Amarteifio said one of the key outputs of TAIVOS™ is providing users an excellent and unprecedented visual experience, especially at night and low-light environments.

He added that the device is currently on sale at the 46 TECNO Mobile outlets that are dotted across the country and on the TECNO Ghana online store.

In brief comments before unveiling the phone, the dancehall star Stonebwoy urged all Ghanaians to purchase the phone.

"The CAMON 16 is being unveiled today but as the brand ambassador of TECNO, I was in a privileged position to use the device before it came on the market and I can tell you that it is the best phone that I have ever used.

"The pictures are very clear and I use it for all my engagements on social media".

To enable smooth multi-tasking and flawless mobile experience, both phones are packed with massive 128GB of internal memory, differing only in RAM; the Camon Premier with 8GB and the 6GB for the Camon Pro.

Another major highlight of the phones is the revolutionary 960 and 120 frame slow-motion video support for the Camon 16 Premier and Camon 16 Pro respectively.

The next level camera phones are also equipped with a high-speed MTK G90T Octa-core 2.0GHz processor.

"TECNO does not have any malware, this was coming from competitors in the market. The CAMON 16 will give you the best experience in the market".