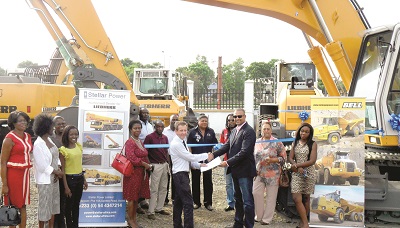 Stellar Power, distributors of British-made generators and other implements, has added new earth-moving equipment and cranes to its product line.

The equipment, the Liebherr earth moving  and Bell equipment, were launched at the company's head office on the Spintex Road in Accra.

Both the Liebherr and Bell are regarded as reliable brands in the earth moving business globally due to their efficiency.

Stellar Power has, thus, become the sole authorised distributor of the two brands in the country.

Makam Plant Hire, an indigenous company, which deals in the rental of earth moving equipment, was the first recipient of the equipment after it was given some right after the launch.

The Managing Director of Stellar Power, Mr Duncan MacNicol, thanked Makam Plant Hire for choosing to deal in the Liebherr range of machinery and further assured them of improved productivity in the coming months.

"You will soon realise that their fuel consumption and level of productivity is high compared to those already in the market," he said.

The Chief Executive of Makam Plant, Mr Atu Mould, said his outfit had aligned itself with Stellar Power Ltd to provide its clients with the Liebherr range of earth moving equipment in order to meet their individual needs.

"Over the past 12 months, the plant hire business has become more competitive and the demand for more productive and fuel efficient machines has increased and is now witnessing an all time high. We are therefore happy to be part of this launch as it will help us meet the demands of our customers," Mr Mould said.

In addition to the generating sets that Stellar Power deals in, the company also distributes trucks, tractors, tipper trucks, trailers, among others.