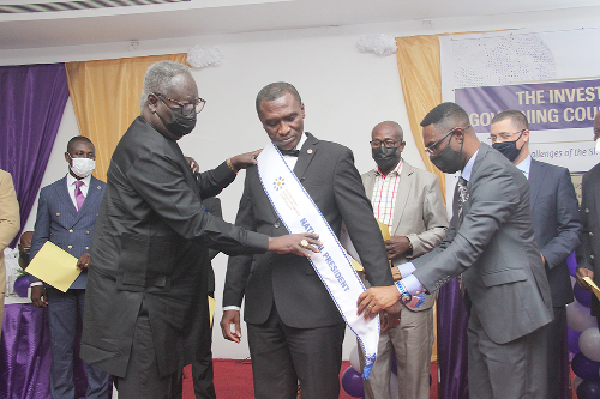 The continuous delay in clearing goods from the country’s ports and terminals, coupled with the inability of Customs to auction the goods abandoned by importers, have become a major setback to business activities at the port.

The practice is also a setback for revenue generation, the Director-General (D-G) of the Ghana Ports and Harbours Authority (GPHA), Mr Michael Luguje, has said.

Consequently, he has called for the review of the country’s Custom regime on auctioning of cargoes in order to free up space at the country’s ports and terminals.

The D-G, who was speaking at the investiture of the seventh governing council of the Chartered Institute of Logistics and Transport, Ghana (CILT-Ghana) in Accra last Saturday urged importers to ensure that they mobilised the necessary funds needed to pay their duties before the goods arrived to ensure expedient clearing of same.

The situation, he said, pushed such goods unto the Unlicensed Cargo List, which accumulated huge debts for the individuals although the situation could have been prevented if the processes to clear crude goods commenced before the goods arrived.

“As at today that I am speaking to you, containers have sat in the port for more than a year and the owners have not come to take them and Customs is not auctioning them.

Maybe Customs is too busy and that is what we feel or probably the processes that they have to go through to quickly auction the cargo is quite cumbersome so sometimes the cargo sits at the port.

The investiture was held on the theme : “The Current Challenges of the Shipping Industry and its Impact on Ghana’.’

The 15-member council, which has Mr Mark Amoamah, as its president, was sworn into office with a call on them to build upon the excellent performance of his predecessors.

Mr Luguje said, “while the delays were happening, the containers occupy space, the goods themselves go bad, and the containers get locked up, shipping lines need it, causing them to increase local charges”.

He noted that aside the issue with exporters, the issue of congestion was compounded by individuals and institutions who had exemption from paying duties, but waited for their cargoes to arrive before they commenced processes to clear the goods.

He, therefore, urged Customs, the only institution mandated by the Ghana Revenue Authority to auction imported goods to take a second look at its regime.

“Whatever challenge there is in terms of cargo auctioning at the port, it should be such that the cargoes can be auctioned almost every other month to free space and release the shipping lines,” he added

The CILT-Ghana President, Mr Amoamah, said his outfit would leverage on research to help inform policy to improve the logistics and transport sector.

He urged members of the institute to embrace digitisation in their daily operations in line with government’s digitalisation agenda adding: “it is when you digitise your operations that you can move to the next step of digitalisation”.

Mr Amoamah said as an organisation, CILT-Ghana, would embark on a sensitisation drive to enhance the capacity of its members and promote local competition.

Also, the organisation would ensure that members were adequately prepared to leverage the opportunities presented by the implementation of the African Continental Free Trade Agreement (AfCFTA).