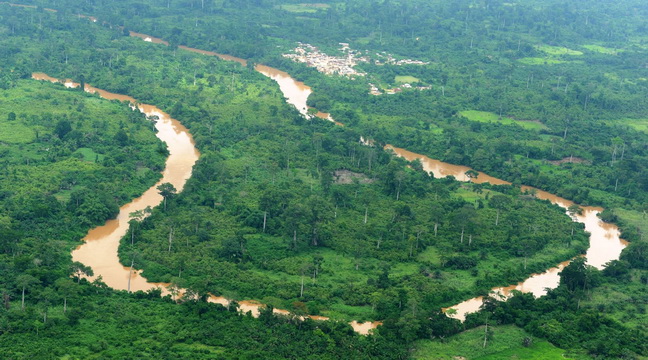 Residents of Wassa Akropong in the Wassa Amenfi East Municipality of the Western Region believe that local assemblies and chiefs will do a better job regulating mining activities than the present arrangement of a total ban and periodic policing.

Wassa Akropong, the capital of the Wassa Amenfi East Municipality is a big mining town with a population of about 103,000. The community has in recent years witnessed the influx of Chinese nationals in pursuit of rich mineral resources that abound here.

Nana Owedie Krokoo Ansah II, Abakomahene of the Wassa Amenfi Traditional Area recalls that the Chinese arrived about five years ago mainly to mine. “They came here about five years ago. Most of the Chinese here came because of illegal mining known as ‘galamsey’. They do other things like sale of spare parts and Chinese food ingredients but mainly they are into mining," he said.

The Chinese presence came with sophisticated equipment into galamsey.

Matthew Mensah, a radio presenter at Wassa Akropong, explains that the locals did not destroy water bodies because they did not have complex machinery.

"When our people mined without sophisticated technology and equipment, we could still drink from our river bodies and there were no pits. However, with the coming of the Chinese, we saw the introduction of technology such as excavators that can dig a large portion of land in an hour. We cannot blame them solely because we have no idea the arrangements made with government authorities with regard to reclamation. There are many lands they have destroyed without reclamation.”

Despite this benefit, there have been some devastating impact.

Nicholas Nyame, a cocoa farmer at Wassa Akropong who has been into farming for over 40 years, lamented how the activities of the Chinese have destroyed their lands and water bodies.

“As a cocoa farmer I can say activities of the Chinese are sometimes devastating. Their mining activities have destroyed our farming lands. They also do not reclaim the lands, leaving pits open. These pits hold water and sometimes people fall into them and die” he said.

The concern of the people of Wassa Akropong is largely the reclamation of land after galamsey activities. They also worry about how the Chinese come into the town to operate disregarding local authorities. “We later noticed their work was destroying our water bodies and lands. However, we were all looking for money so we the Ghanaians kept leading them on without any regulation. Even in cases where government had laid down rules to be followed like reclamation, we did not enforce that. We just let them keep going.”

Another dimension to look at is whether or not the Chinese interfere in the local politics.
Mr. Mensah, the Radio presenter alleged that the Chinese interfere in local politics by pumping in money to back candidates. “They now have authority to the extent that during elections they ‘push in money’ to support candidates who will allow them to continue their activities.”

Robert Nyan, the Constituency Chairman of the National Democratic Congress (NDC), thought otherwise. “No Chinese backs a political candidate. I have never seen that. The Chinese do not do politics. We the locals take them everywhere. They work with whichever party that is in power. Currently what they know is that the NPP is in power and not the NDC”.

The Government of Ghana put a ban on galamsey activities in the country, obviously affecting Wassa Akropong. But the residents say that approach is too drastic.

For Nana Kumi Daffour, the Constituency Organiser of the New Patriotic Party (NPP), the ban led to the party’s loss in the constituency in the 2020 elections. “During the electioneering the people were observing with the intention of punishing us during the elections because of how the illegal mining issue was handled. We lost bitterly. I advised our leaders in a meeting to be circumspect in tackling this menace because I’ve been the party’s organizer here for 20 years and know what it meant to them.”

Mr. Daffour continued, “I told them to let the assembly plus other stakeholders enforce the laws by taking the required monies from the miners for reclamation. If they refuse to reclaim, they would be refused relocation to another mining site.

“It is good government has halted their works. The rate at which they were messing up the water bodies was alarming. We still haven’t recovered yet. However, regulation of their activities will really help in terms of how far they should operate, at least 50 metres away from our water bodies. The chiefs are in charge of the land and so if a miner consults with the chief before beginning operation, he/she would be regulated. The free range operation is not helping. The chiefs do not even know about those with legal permits. We are always taken by surprise. Should the chiefs be empowered, it would be difficult for people to mine haphazardly especially without the required permit,” Nana Ansah II said.

“Government must come up with an outline that will determine the role of all stakeholders especially the assembly and the chiefs so that people don’t just barge in, to mine haphazardly. So long as you mine here, the community must benefit.” Radio presenter Matthew Mensah.

“The entire regulation must be placed in the hands of the assembly and the chiefs. The Minerals Commission cannot do this work effectively. They do not live with us. They come here once in a while for inspection. However, the assembly is with us and they can come around regularly to ask why pits have been left uncovered. That will work”, said Nana Mensah, an opinion leader.

For the people of Wassa Akropong, government's total ban on galamsey is harsh. Rather, they believe streamlining such mining activities including those of the Chinese, is the way to go.