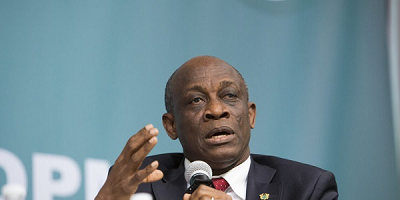 A former Minister of Finance, Seth Terkper, has called for strategic policies to help build adequate buffers that can insulate the economy against the effects of crisis.

Mr Terkper has also made a case for commercial and capital-intensive projects to be ring-fenced from the budget to help reduce the fiscal strain that such expenditures put on government finances.

The chartered accountant and economist said the economy had matured to the point where it must begin to anticipate crises and prepare adequately for them.

That, he said, was necessary to increase its resilience and response strategy to shocks.

He gave the advice when he addressed a dialogue virtually on current challenges facing the economy.

The event, on the theme: ‘Inflation, exchange rate and budget challenges: which way out?’, was organised by the PFM Tax Africa Network, an initiative of Mr Terkper, who was Finance Minister between 2013 and 2017.

It allowed him to explore the challenges and proffer solutions to soaring inflation, the unstable exchange rate and the debt and fiscal pressures.

Mr Terkper said just like life, economies would usually go through good and bad times and foresight managers must learn to use the goodies of good times to prepare for bad times.

Using his tenure as an example, he said following the crude oil price crash that deepened the foreign exchange rate volatilities in 2014, his outfit set out to build buffers against rainy days.

That, he said, led to the building up of the Ghana Stabilisation Fund (GSF), which was created in 2011 as a buffer fund against uncertainties, using revenue from one oil field.

But instead of continuing to build up the fund with more transfers from the three oil fields that the country now had, the former Finance minister said the government had rather depleted it.

He said to date, the reports of the Public Interest and Accountability Committee (PIAC) showed that about US$400 million had been drawn with little to no amount added.

“Could it be that if we were building the GSF, we could have been withdrawing between US$700 to US$800 million on our own, considering that we did so much with one oil field?

“That is how you wean yourself off the International Monetary Fund (IMF). As it stands, we are depleting the GSF due to fiscal pressures and we are not preparing adequately for the next crisis. If you belittle past crisis, you will not prepare for the next crisis,” he said.

He said a typical example was how the COVID-19 pandemic seemed to have caught the country off guard.

According to Mr Terkper, another strategy to strengthen the resilience of the economy was for the government ensure that commercial projects paid for itself.

A case in point, he said, was the Terminal Three at the Kotoka International Airport (KIA) that was ring-fenced from the national debt.

He explained that the loan that was used to construct the terminal being repaid with the airport tax, thereby reducing its impact on the debt and the economy in general.

“We did not issue sovereign guarantee but one does not know whether that money is still ring-fenced or the debt has now been put on the sovereign.

“Such initiatives are important for repayment, which can then free resources needed for social infrastructure such as the e-schools that we built,” he said.

Mr Terkper noted that expenditure remained the biggest headache that needed to be tackled to be able to reduce the deficit and the debt situation.

He said that the country’s financing was not reflecting in the budget and that was why the debt was rising.