Non-payment for power consumed, others are major causes of energy sector debt – ACEP 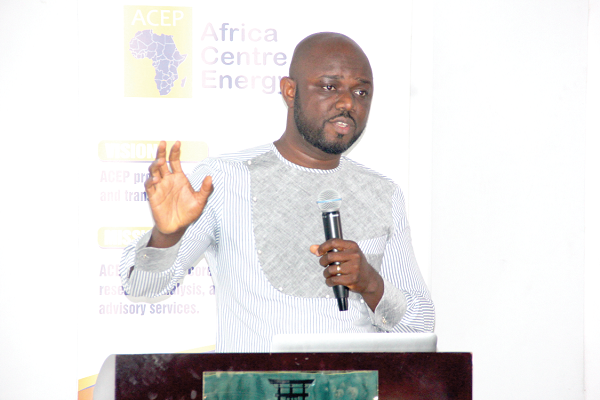 A new report has identified that the increasing commercial losses witnessed in the power distribution sector significantly contributes to the continuous debt accumulation in the sector.

It said despite the efforts made to clear the energy sector debts under Energy Sector Levy Act (ESLA), the debt ,if left unresolved, could reach a total of US$12.5million by 2023.

According to the report on “The Prevalence of Illegal Meters in the National Grid System,” non-payment for power consumed and power theft through illegal connections are the principal causes of the commercial losses witnessed in the power distribution sector.

Consequently, electricity distribution losses for the first quarter of 2020 were 26.63 per cent, technical losses accounted for about 10 per cent while commercial loss was 16.63 per cent.

The Electricity Company of Ghana (ECG) reports estimated annual losses from power theft to be about US$418.2 million.

A Policy Lead, Petroleum and Conventional Energy at ACEP, Mr Kodzo Yaotse, presented the report during a webinar organised by the Africa Centre for energy Policy (ACEP) on April 12, 2021.

He noted the Self-Help Electrification Programme (SHEP) required communities to be within 20km of an existing 33kV or 11kV supply, be prepared to purchase all low voltage (LV) poles to be connected and have a minimum number of houses wired up and ready to receive electricity; this has become the programme's fundamental challenge.

As a result, he said the meters for SHEP found their way outside the designated areas for implementation.

“The incidence of the SHEP meters being used outside its designated locations has resulted in the increasing trend of illegal connections to the grid, especially in urban residential areas.”

“These meters are considered illegal because they have not been processed to enable standardised readings, billing, among others, hence their consumption is not captured in the grid system leading to commercial losses to the distributors,” he said.

Mr Yaotse cited that a revenue protection exercise conducted by ECG between December 2019 and January 2020, led to the recovery of a total of 10,142 illegal SHEP metres in the Ashanti Region.

Among the objectives of the ACEP study was to verify the existence of these illegal SHEP meters to: provide empirical evidence on the problem, raise awareness and inform policy decisions for the reform of the electricity distribution system.

Urban and sub-urban residential areas in the Ashanti and Greater Accra regions were sampled based on the perception of the prevalence of illegal SHEP meters in these regions.

Key informant interviews with individuals with knowledge and experience on the issues of illegal connections and how the operations were carried out were also conducted.

Over 70 per cent of those meters had non-functioning LCD displays hence consumption data could not be accessed, and so even if the power distributor could locate these meters, it would be unable to estimate how much power was consumed for retrospective billing.

The remaining meters identified showed very high consumption with some as high as 28,320kWh.

The study also revealed a disturbing phenomenon of “abortion meters”.

These are meters that are deliberately damaged with the application of concentrated heat on the digital displays or the removal of the digital components of the meter, which allows communication with the power distributors, all in a bid to erase and prevent record of consumption, especially when it is very high.

Also, the report alleged that agents of the power distributors, including sub-contractors and service providers who distribute meters among others, actively facilitate and advise consumers on illegal connections and meter tampering for their private gains.

The study raised the need for quick reforms in addressing the challenge of illegally connected SHEP meters, the wider problem of illegal connections and non-payment for power consumed.

“ACEP therefore recommends that ECG should immediately take steps to regularise all SHEP meters and eliminate the damaged ones. It should adopt a whistle blower mechanism to support the detection of illegal connections in the system,” Mr Yaotse stated.

The report suggested that the ECG should overhaul its monitoring system to ensure that they are able to account for consumption in the system.

“Again, power distributors should monitor their staff and sub-contractors in charge of installing and reading meters to identify the recalcitrant ones who are engaged in illegal connection for sanctions,” it added.