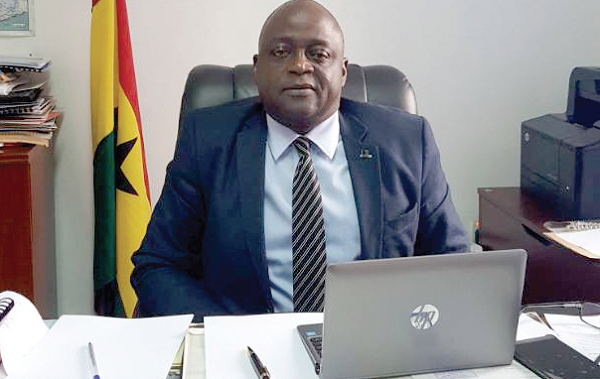 The government has initiated a major programme to strengthen railway infrastructure across the country.

For this to be achieved, much depends on the Ghana Railway Development Authority (GRDA) which by law is both the regulator and the developer of the sector.

It is for this reason the GRAPHIC BUSINESS newspaper met with the Chief Executive Officer of the GRDA, Mr Richard Diedong Dombo to find out about his objectives for the sector.

GB: Who is Mr Dombo?

RDD: Mr Dombo is a lawyer who has been domiciled in the United Kingdom (UK) for many years prior to my appointment.

I have been working in the railway sector in the UK for 23 years.

I have a passion for the sector and this is indicated by the fact that despite me being a lawyer, I opted to work in the sector for that long.

GB: What is the mandate of the GRDA by law?

Its mandate by law is supposed to be both the regulator, as well as the developer of the railway sector.

GB: How has the journey been so far since you assumed this position?

RDD: The journey has so far been good but not without challenges.

The President created a stand-alone railway ministry which demonstrated his commitment to the development of the sector.

This came in to complement the GRDA so it was a case of a new ministry to superintend over the GRDA so we had to find a common balance with regards to our mandate and that of the ministry.

Finding that balance was the first challenge which was followed by the composition of the board to govern the GRDA which took a bit of time.

These were all administrative challenges.

Other challenges include getting rid of squatters occupying the route for the Tema to Akosombo rail line which is one of our ongoing works.

GB: What was the state of the authority when you took over?

RDD: It was not fit for purpose.

To be an effective authority to undertake development and regulation, you needed more technical staff than I came to meet.

I came to meet an authority with a total staff of 12 and these included drivers and cleaners.

There was just one director so my first priority was that to be relevant and effective, we should have the foundation and the structure in place so I started to identify the key areas that we needed to recruit people to fill.

For a functional authority, we needed 72 staff but for immediate needs and purposes, the Services Commission approved for 58 for the start.

Out of the 58, 32 have been approved, awaiting financial clearance from the Ministry of Finance.

This was lodged late December and we had hoped that by early January, clearance will go through but the bureaucratic wheels are still grinding slowly and the clearance has still not come.

GB:How far with the reviewing of the railway master plan?

RDD:The need for the review has been accepted. We now have a board which was just constituted in December and at our first meeting last month, it was placed before the board the need for them to approve of the review of the master plan.

We are not seeking to make wholesale changes but just adding some routes. We just want to add areas that have become necessary to be added.

GB: How much are you estimating for the revised master plan?
RDD: As for figures, they can change anytime.

Even with the initial US$21.5 billion that was budgeted for the old master plan, it would have been affected by the feasibility studies which has not been done yet.

But without question, if US$21.5 was estimated for the then master plan, then a review and additional routes would increase the budget.

GB: What is the state of the Tema to Akosombo rail project?

RDD: I launched start of work on October 2, 2017and I was taken on a tour three weeks ago on the project and the progress made has been impressive.

The contractor has laid foundations and has cleared all the obstacles and started putting the infrastructure in place. He is up to about 16 kilometres and going forward.

The contractor is bullish about the fact that it’s a three years project but will finish well ahead of time, all things being equal.

GB: How far with the Western rail line

RDD: A contractor is on sight between Kojokrom and Manso but that is just one fraction of the entire route.

Negotiations are still ongoing to secure a contractor for the reminder of the line.

We have currently signed an MoU and if all the terms are agreed, we will soon see a contractor on sight for the reminder of the line.

GB: What about the Eastern railway line?
RDD: A market sounding event was organised last year to attract investors to this line under a Public Private Partnership (PPP) arrangement.

Because this is under a PPP arrangement, the market sounding event was led by the Ministry of Finance, with the PwC as the transaction advisors so we are yet to receive any update from the MoF.

But on our own as an authority, we have had close to 300 unsolicited bids expressing interests in all aspects of the master plan.

There have been bids but we need to follow the processes.

RDD: It is good practice in a developed railway sector to have a separate regulator from the developer but the country is not near that yet.

We are still very basic in terms of our railway development and it may not be an immediate need but it is a logical thing to do.