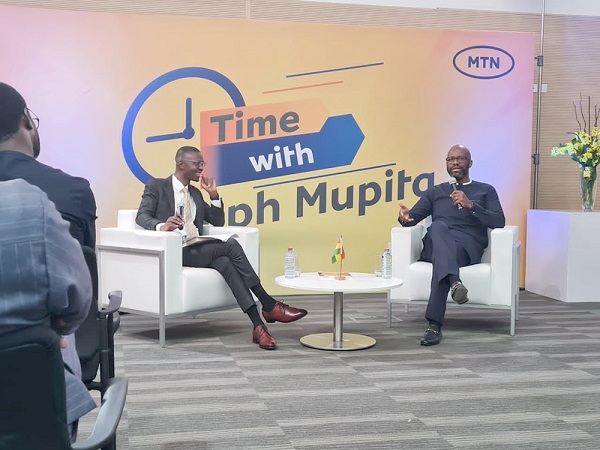 Ralph Mupita (right), President and CEO of MTN Group speaking to the media during the interaction. With him is Bernard Avle of Citi FM, the moderator for the event. Follow @Graphicgh

THE President and Chief Executive Officer of MTN Group, Mr Ralph Mupita, has assured shareholders of MTN Ghana of a major rebound in the company’s share price on the Ghana Stock Exchange (GSE) in the medium term.

Refusing to acknowledge the negative impact of the introduction of the Electronic Levy (E-Levy) on the company’s poor share price performance on the local bourse since the dreaded levy was introduced, he described the phenomenon as a short term blip which would be overcome in the medium to long term because of the company’s strong ambitions as a technology company.

Speaking to a cross section of editors in the country last Friday, he mentioned the commitment of the company to offload some 6.7 per cent more of its shares on the local bourse to enable the company to reach its target of 30 per cent by the end of the year as a key measure to improve the liquidity of its shares.

As at the last trading of Friday, May 20, the share price of the company had dropped to GhC0.90 per share, forcing market analysts to attribute the development to the implementation of the E-Levy.

MTN Ghana, trading under the name MTNGH, had began the year with a share price of GHC1.11 but has since lost 18.9 per cent off the price valuation, ranking it 32nd on the GSE in terms of year-to-date performance.

The company’s shares is the third most valuable stock on the GSE with a market capitalisation of GHC11 billion which is 17.7 per cent of the entire GSE equity market.

The development has raised concerns among individual and corporate shareholders, compounded by the fact that the company had lost 10 per cent of the stock’s value from April 20 to date.

MTN’s stock has been the most traded stock on the GSE over the last three months, trading a volume of 947 million shares valued at GHC909 million over the period with an average of 15 million traded shares per session.

In an interview with a cross section of media editors last Friday, he outlined a number of measures being taken to restore hope in the company’s shareholders and customers.

Key among them was when Mr Mupita indicated that the quest to localise the company in Ghana by seeding off 30 per cent of its equity to Ghanaians remained intact.

“We are targeting to get to that 30 per cent no later than the end of the year”, he said.

That notwithstanding, we are going to try and get to that 30 per cent localisation because we think more and more Ghanaians - individuals and institutions, should own this quality assets”

Since 2018 when the MTN Ghana listed on the Ghana Stock Exchange (GSE) it has been able to offload up to 23.7 per cent of the company, leaving 6.7 per cent to go per its target.

“I'm very pleased to say we've made progress. We now have precisely 23.7 per cent gone. So now, what we have left is 6.7 per cent of shares to localise.

The reason why we are doing that is we want more and Ghanaians to enjoy and participate in the economic success of Ghanaians over time, because they're also the consumers,” he said.

According to him, the move is expected to further drive deeper liquidity in the local market so the stock price of the company can also go up.

Mr Mupita said liquidity is obviously a function of the share price and the management of the group was alive to that fact.

The assurance, therefore, is expected to ignite some more activity in the stock market to drive the shares up to levels expected.

This is because a giant in the industry and with its services now the most sought to drive every sector of the economy, particularly with the use of data, there is room to see a major rebound in the performance of the company’s fortunes on the stock market.

The concerns of the shareholders, mostly institutional with heavy investments as a buffer against their operational losses in the wake of the economic challenges, are expected to be allayed as there is still hope where MTN will continue to return profits and pay what they described as generous dividends to shareholders.

One analyst who pleaded anonymity urged the government to be cautious about how it uses its policies to milk the profits of tax compliant companies.

He said particularly with listed companies, they were sensitive to comments and legislation passed by governments which affected their bottom-line.

“When you milk their profits, you milk your own tax revenues in the end. You also cause disruptions to the market, particularly those listed and investors therefore, lose confidence. We have to be careful because this can have a negative impact on potential investors.