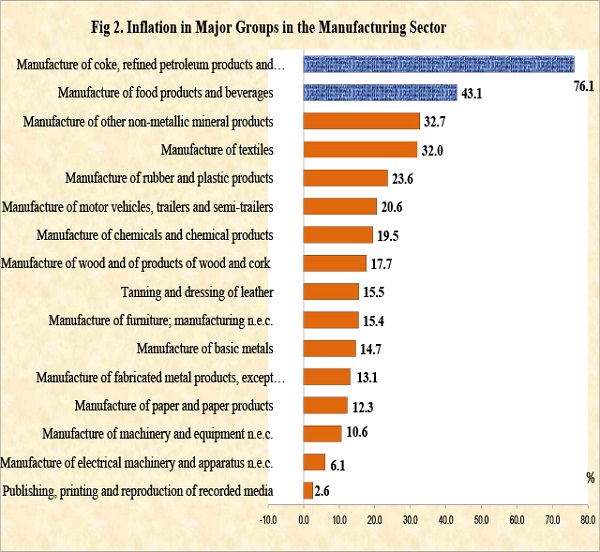 THE Producer Price Inflation (PPI) rate for April 2022 increased to 31.2 per cent, up from the 29.3 per cent recorded in March.

This represents an increase of 1.9 percentage points.

The Producer Price Index (PPI) measures the average change over time in the prices received by domestic producers for the production of their goods and services.

It is also a major indicator of what the general price levels of goods and services within a period will be.

The Government Statistician, Professor Samuel Kobina Annim, in announcing the new rate yesterday, said the April PPI was driven mainly by increases in the mining and quarrying; and the manufacturing sub-sectors.

The PPI in the mining and quarrying sub-sector increased by 1.6 percentage points from 33.6 per cent in March 2022 to 35.2 per cent in April.

The PPI in the manufacturing sub-sector, which constitutes more than two-thirds of the total industry, increased by 2.6 percentage points to 38.6 per cent.

The utility sub-sector, on the other hand, recorded the lowest PPI rate of 1.1 per cent.

The rate increased to a record 11.8 per cent but decreased continuously to record 8.1 per cent in August 2021. Subsequently, it resumed an upward trend to record 31.2 per cent in April 2022.

In April 2022, two out of the 16 major groups in the manufacturing sub-sector recorded inflation rates higher than the sector average of 38.6 per cent.

In April 2021, the producer inflation rate in the petroleum sub-sector was 28 per cent.

The rate then fluctuated between May and August 2021. Thereafter, it increased continuously to 58.4 per cent in November 2021 but dropped to 36 per cent in January 2022.

The producer price index (PPI) measures inflation from the perspective of costs to industry or producers of products.

Because it measures price changes before they reach consumers, some people see it as an earlier predictor of inflation than the CPI.

PPI data is segmented into three main areas of classification, with the core PPI the most-watched.

With these in mind, there is an indication that, this months inflation rate will rise above the 23.6 per cent currently but marginally.