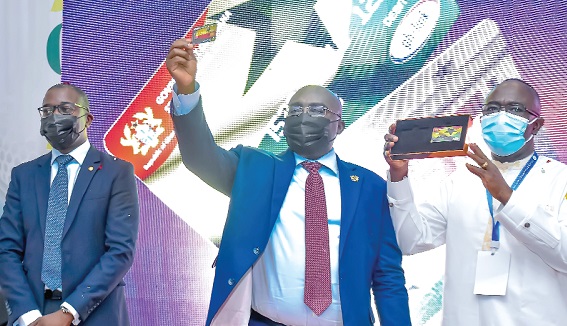 The Controller and Accountant-General’s Department, under the auspices of the Ministry of Finance, has launched an innovative product for use by government functionaries and employees.

In a release issued by Fidelity Bank Ghana last Sunday, it said the GoG E-Travel Card, which would also function as a unique staff identity card, was an integral part of the robust Government of Ghana Staff and Travel Card platform to facilitate expense management of international and local travel for all government employees.

“Both the Visa and Gh-Link versions of the Government of Ghana Staff and Travel Cards were launched by the Vice-President, Dr Mahamudu Bawumia, at this year’s Annual Conference of the Controller and Accountant-General's Department (CAGD) that was held in Cape Coast,” it said.

Dr Bawumia, according to the release, noted that the government was building a system that, among other things, would enhance transparency; promote accountability, discipline and trustworthiness; enable inclusiveness; encourage efficient public sector management and public service delivery; and eliminate incentives for bribery and corruption.

He said the introduction of the GoG E-Travel Card for public officials was to ensure that the government reduced some malpractices in the system and also cut down on waste as a result of over-expenditure.

The release said the Staff and Travel Card system automated and integrated all processes from the point of initiation of card issuance requests and funding requests from MDAs and entities through approval and disbursements.

“It also provides expenditure tracking and retirement of accountable imprests. The Staff and Travel Card portal will replace all manual systems of managing travel imprests in the public service sector by delivering personalised cards to every government employee,” it added.

The Controller and Accountant General, Kwasi Kwaning-Bosompem, said, “The current manual and tax-based system of handling imprests for official travel is laborious and government officials often need to change local currencies into foreign currencies at the banks, some at the forex bureaus and in some cases at unorthodox places, which some people call the Black market, at exorbitant rates and this comes at a cost to the government.

“We are set to roll out the GoG E-Travel Card to all Ministries, Departments and Agencies (MDAs) for use as the official system for disbursing and retiring of imprests for official travel in the public service.”

The Managing Director of Fidelity Bank Ghana, Julian Opuni, said the creation of the Government of Ghana Travel Card aligned with the bank’s digitisation agenda is to provide convenient and seamless digital transactions for all.

"We commend the government for the bold step it has taken to check overspending and funds misappropriation in the public sector through the introduction of the Government of Ghana Staff and Travel Card,” he stated.

He said Fidelity Bank was excited to partner with the government in the cashless disbursement of travel allowances which would ultimately allow for accountability, among other beneficial outcomes.

“This partnership will afford public officials the opportunity to experience the flawless service that is the hallmark of Fidelity Bank,” he added.