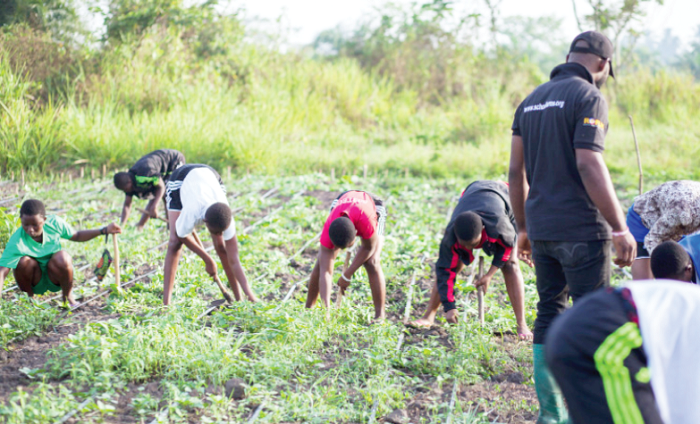 The youth should be supported to participate in modern agriculture practices and agricultural enterprises along the value chain
30.5k Shares

The Ghana Census of Agriculture (GCA), 2017/2018 has recommended the promotion of agriculture as a viable business among the youth.

It said they should be attracted, especially those with tertiary level education, among whom unemployment was high.

The report released recently showed a low participation in agriculture among the youth and stated that it was important to bring them on board in order to promote diversity and complementarity.

“The full potentials of agriculture in employment, food security, foreign exchange earnings, wealth and investment outcomes are not being realised considering the current modes of operation and characteristics of the persons and institutions engaged in agriculture.

“Therefore, there is the need to address some issues, such as adoption of new technologies, low productivity in agriculture and lack of resources, among others, that have plagued the agriculture sector to attract more people and investments into agriculture,” it said.

The United Nations (UN) defines youth as persons aged 15 to 24 years and the National Youth Policy of Ghana 15 to 35 years.

About two-thirds (66.7 per cent) of the youth are males with the proportion of females in the rural areas (34.2 per cent) higher than their counterparts in the urban areas (29.7 per cent). Three in 10 persons engaged in agriculture are youth with similar proportion of males (30.1 per cent) and females (28.9 per cent).

The census suggested the youth to be sensitised to appreciate the viability of agriculture as a source of employment and livelihoods and to encourage the youth with higher levels of education other than basic education to go into agriculture for their livelihoods.

“Support the youth to participate in modern agriculture practices, and agricultural enterprises along the value chain, including off-farm activities such as handling, processing, packaging and transportation.

“Adopt special programmes to build the capacity of the youth in agricultural operations and facilitate the acquisition and documentation of land for agricultural purposes,” it stated.

The overall objective of the 2017/18 GCA was to generate more current and reliable information on the structure of agriculture and benchmark data on crops, livestock, aquaculture and tree planting in the 2017 cropping season (from March 1, 2017 to February 28, 2018) as the reference period.

It sought to provide a wide range of data to strengthen the National Agricultural Information System and for improvements in the production and dissemination of statistics on food and agriculture for policy formulation.

In terms of coverage, the GCA was a nationwide exercise, which collected data from households and institutions, except embassies and consulates, in all identified structures in the then 10 administrative regions.

All structures were listed in both urban and rural areas of Ghana in all the 37,675 enumeration areas created for the 2010 Population and Housing Census.