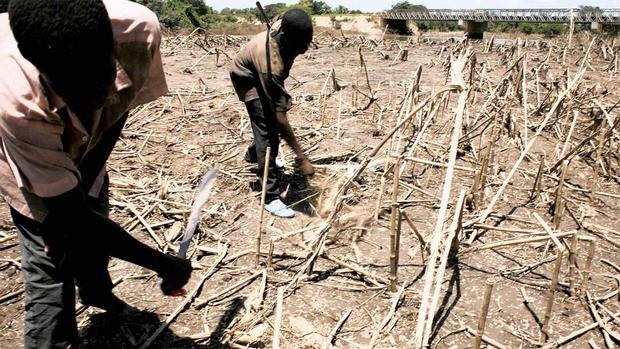 WHITTLING AWAY: Excessive use of the most fertile agricultural land for real-estate development, construction and sand mining is gradually depriving Ghanaian farmers of their livelihood. Picture: EPA

Multinational snacks and chocolate company, Mondelez International on Tuesday announced it has entered a $4.9 million agreement with Ghana’s Forestry Commission to reduce emission in its cocoa supply chain across Ghana.

The agreement was sealed by a signed memorandum of understanding (MOU) with the Forestry Commission of Ghana, Ghana Cocoa Board and United Nations Development Programme (UNDP).

The MOU will see Mondelez reinforce its commitment to reduce emissions in its cocoa supply chain across Ghana. Ghana, one of the largest cocoa-producing countries supplies 20% of the world’s cocoa.

However, according to the Ghana Cocoa Forest REDD+ Program (GCFRP), Ghana also has one of the highest deforestation rates in Africa at 3.2% per annum. This is attributed to unsustainable expansion of cocoa and other agricultural crops.

Through Mondelez’s sustainable cocoa sourcing program, Cocoa Life, the company will adopt a leading role in implementing projects to deliver the (GCFRP) which aims to tackle deforestation and forest degradation.

"Deforestation makes up the largest part of our carbon footprint, which is why it’s so important for us to address this issue head on. Through this collaboration, we can be even more efficient in safeguarding the environment and helping cocoa farmers become resilient against climate change", said Executive Vice President and President Europe at Mondelēz International, Hubert Weber.

"This partnership builds on Cocoa Life’s ongoing forest protection efforts. It’s an exciting new chapter in our work in Ghana and fits with the commitment we made by signing the Cocoa & Forests Initiative Framework for Action at COP23", said Weber.

Farmers will essentially be trained to grow more cocoa on less land. Mondelez has long been involved in addressing deforestation through Cocoa Life. This has been seen by the company's quest to end deforestation, endorsing the New York Declaration on Forests in 2014.

The company also committed to lead private sector action as part of Côte d’Ivoire’s national program to combat deforestation in December 2015 and in May 2017, Mondelez Mondelēz International signed a Memorandum of Understanding with the Ministry of Environment in Côte d’Ivoire to support the country’s bold ambition to reach zero deforestation in cocoa (part of the REDD+ program, supported by the World Bank).

On Mondelez's commitment to Ghana, the Ghanian Minister for Lands and Natural Resources also expressed the government's commitment to promote public-private partnerships.

“The Ghana government is promoting public-private partnerships, which are very critical for sustainable economic growth in all sectors, including the forestry sector. It is, therefore, encouraging that Mondelēz International’s Cocoa Life program is partnering with government to implement an integrated landscape approach to sustainable cocoa production and forest management,” said Minister for Lands and Natural Resources in Ghana and signatory of the Cocoa & Forests Initiative, John Peter Amewu.

“Cocoa Life is a valuable asset to the realization of the Joint Framework for Action under the Cocoa & Forests Initiative, as it brings on board advanced environmental protection strategies at farmer, community and national levels.”

The R59 million commitment from Mondelez will be spanned over five years to the GCFRP which aims to reduce the high rate of deforestation and forest degradation as well as their associated greenhouse carbon emissions.

While this partnership may contribute to job creation in the cocoa value chain, this is not the sole intention of the partnership, says Mondelez.

The action plan will focus on the following:

- Coordination and measurement, reporting and verification