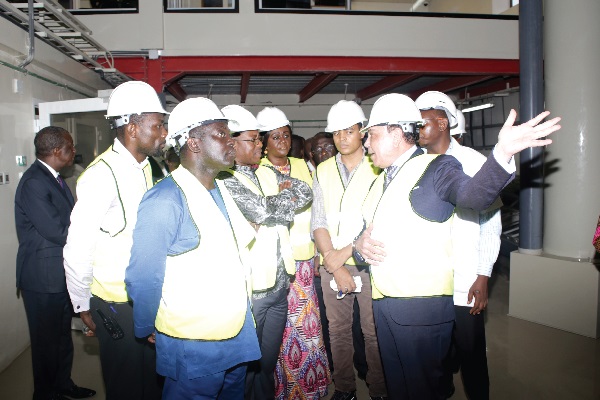 Dr Said Deraz (hand raised), Chief Executive Officer of the Gold Coast Refinery, explaining a point to Mr John Peter Amewu (3rd left), Minister of Lands and Natural Resources, and other officials, during a tour of the refinery in Accra. Picture: GABRIEL AHIABOR

The Minister of Lands and Natural Resources, Mr John Peter Amewu, has toured Gold Coast Refinery at the airport area in Accra to acquaint himself with the production processes that take place there.

Accompanied by his two deputies, Mrs Barbara Oteng-Gyasi and Mr Benito Owusu Bio, the minister was conducted round the facility by the Chairman and Chief Executive Officer of the refinery, Dr Said Deraz.

The minister stressed the importance of a policy framework that would regulate the activities of the mining industry.

Mr Amewu said he was also happy to note that Gold Coast Refinery had the capacity to refine precious metals to add value to them.

He expressed regret that the country lost so much from the export of raw gold, and that Dubai for instance refined lots of gold, and as much there was the need for Ghana to act in a similar way.

The minister again expressed happiness about the refinery, saying it created jobs for the youth.

Dr Said referred to the losses that the country made when gold had to be shipped outside for refining, and that the refinery, therefore, added tremendous value to the extracted gold.

The chairman pointed out that the refinery exhibited all the necessary safety measures in its production, while it also eliminated waste.

He said the refinery was a subsidiary of the Eurogest De Invest which also had interest in other areas, including health and agriculture.

Dr Said said the refinery was the largest gold refinery in West Africa and the second largest in Africa.

He said the refinery sought to bring out its products in line with the highest quality standards and would provide cost-effective products as well as ensure effective customer service.