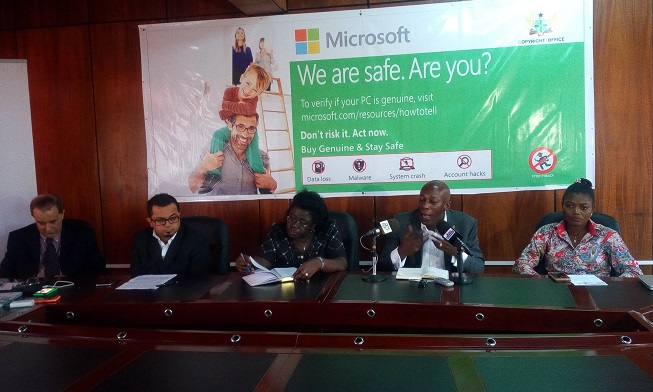 American multinational technology company, Microsoft Corporation has announced a partnership with the Ghana Copyright Office to prevent the use of counterfeit software which has negatively impacted the lives and businesses of many users who have been exposed to security breaches.

The partnership between Microsoft and the GCO was unveiled yesterday at a press conference as part of the first edition of the Cyber Security Awareness Week in Accra.

The Country Manager of Microsoft Ghana, Derek Appiah said the rapid development of the technological sector of the nation is threatened by the use of pirated software which come with malware.

Mr Appiah explained that the use of pirated software by organisations and individuals leads to data loss, system crashes and account hacks which in the long run cost more than buying genuine products.

He added that Microsoft aims to be a champion of cyber security awareness, hence its partnership with the GCO to promote anti-piracy awareness in Ghana.

“Technology is evolving and so is the increased need for security especially around information sharing. What was once a semi-isolated affair and it has become a multi-agency, cross-continent operation, with governments and rights holders alike striving to share information and pool resources,” said Derek Appiah, Country Manager of Microsoft Ghana.

"Our networks are getting smarter so are the threats, it’s more important than ever to work with governments to strengthen intellectual property laws and crack down on piracy. The impact of pirated and counterfeit software has impacted the lives of many users who have been exposed to security breaches.

"As a company, we make cyber security which broadly includes anti-piracy, our day to day business and as an industry leader we shall continue to forge partnerships to counter these threats to our consumers".

The Head of the GC0, Ms Yaa Attafua noted with regret how many copyrighted works have been infringed upon because of the the advancement of technology in the 21st century.

She said the partnership with Microsoft will enable her outfit to sensitize the public about the dangers associated with pirating and using pirated software.

Ms Attafua added that after educational programme had been run for a while, the GCO will embark on an intensive drive to find and prosecute manufacturers, distributors and users of pirated softwares who may face a three-year jail term if convicted.