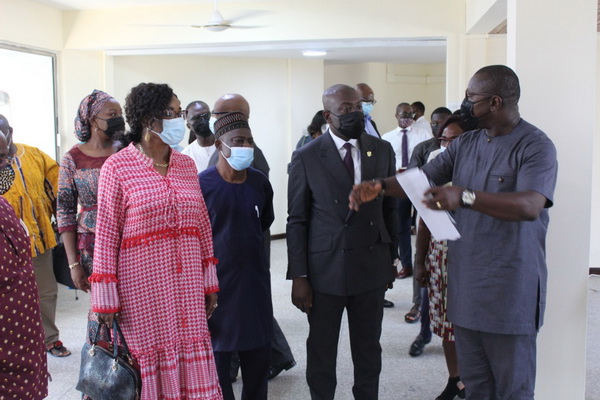 The Minister of Information, Mr Kojo Oppong Nkrumah has pledged his assistance to the Ghana News Agency to carry out its transformational agenda with focus on economic news.
30.5k Shares

The Minister of Information, Mr Kojo Oppong Nkrumah has pledged his assistance to the Ghana News Agency to carry out its transformational agenda with focus on economic news.

That strategic plan would carve a niche for the Agency and make it retain its relevance in the changing trend of the media landscape, he said.

The Minister said this when he paid a working visit to the Ghana News Agency (GNA) and interacted with the Board of Directors, Management and Staff.

He said the changing trend in the media required specialisation and commended Management for the foresight towards regaining leadership in the marketplace, adding that the Ministry would support the GNA to go “heavily digital.”

Mr Oppong Nkrumah said the Ministry was aware of challenges facing the Agency and had started processes towards allowing it to retain part of its Internally Generated Funds (IGF) to support operations.

He said the Ministry would also engage government and other institutions to provide the needed logistical support to the Agency and tasked the Staff to remain professional.

The Chairman of the National Media Commission, Mr Yaw Boadu Ayeboafo said the Agency was known for professionalism and urged its reporters to ‘remain on track’ and shun hearsays.

He commended the Board, Management and Staff for their sacrifices to revamp the GNA amid the challenges and said its fortunes would be better if allowed to retain part of the IGF.

The General Manager (GM) of the Ghana News Agency, Mr Albert Kofi Owusu said despite the challenges, the Agency had made some gains with restructuring of operations, which was showing a promise of an organisation ready to deliver on its mandate.

He said the Agency was poised to take the commanding lead as the nation’s only newswire service dishing out stories to its growing list of subscribers, both local and global.

The GM said the Agency had embarked fully on retail news with the view to curating and packaging news stories for select groups and looking to grow young audiences.

He commended the Minister for his role in the appreciable increase of budgetary allocation to the Agency and support for the refurbishment of parts of the Head Office building and the GM’s residence.

Mr Owusu, however, said there was a huge backlog of needs that must be addressed to reposition the Agency as a market leader, with major ones being tools for newsgathering, laptops, vehicles and refurbishment of offices.

He commended the Bui Power Authority for partnering the Agency to refurbish its Head Office; the Newsroom and Information Technology (IT) offices.

He lauded the Intercom Programming and Manufacturing Company Limited (IPMC) for supporting the Agency’s digitisation drive with software suite; a computer network system to speed up news processing.

He said the Agency had also received some funding and logistical support from the Volta River Authority, Goldfields Company Limited, MTN, Prudential Life Insurance, Stanbic Ghana, National Communications Authority and the Ghana Oil Company (GOIL) and with such support the GNA would be repositioned to lead the “Brand Ghana” agenda.

Professor Olivia Kwapong, the Chairperson of the GNA Board, said the Board had confidence in the Management and Staff of the Agency and would continue to support its efforts at leading the market with credible, unbiased and objective news.