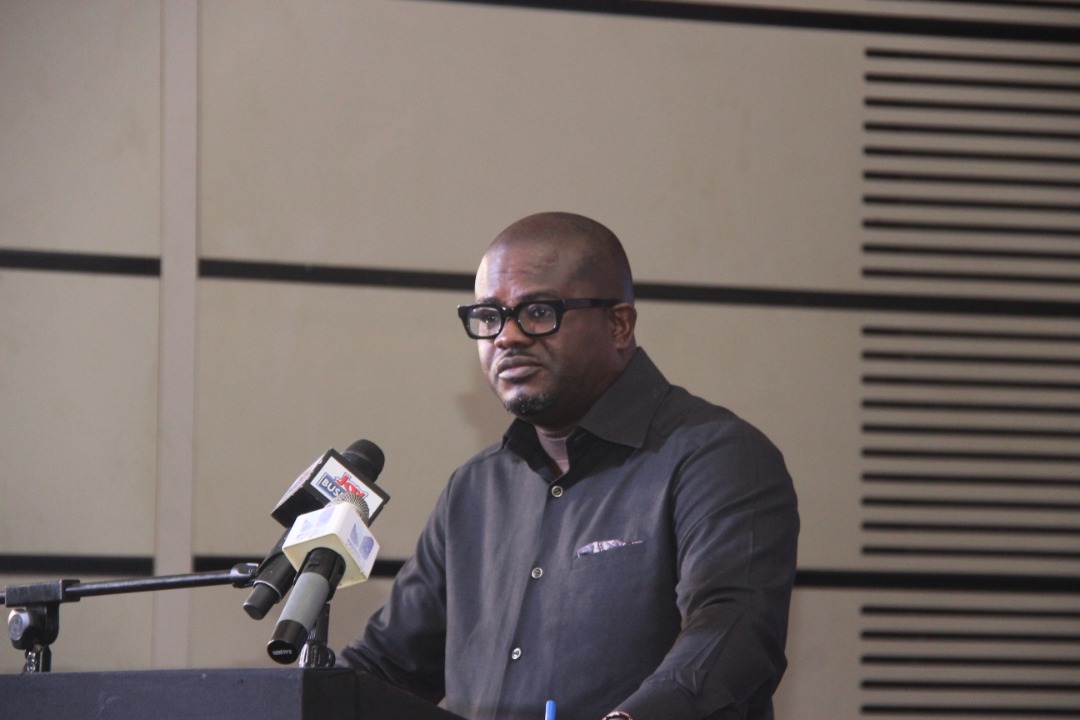 Mr Charles Adu Boahen (with mic), Minister of State at the Ministry of Finance, making some remarks at the event. Picture: ESTHER ADJEI

The Minister of State at the Ministry of Finance, Mr Charles Adu Boahen, has assured investors and the global community that the economy is strong and robust.

He said efforts to achieve the 2021 deficit and revenue targets were also well on track and urged investors to have faith in the economy.

Mr Adu Boahen, who gave the assurance at the Graphic Business/Stanbic Bank Breakfast Meeting in Accra yesterday, said Ghana's economic fundamentals were as robust today as they were three to four months ago.

He added that the government would use the 2022 Budget to consolidate the gains and deepen the confidence of global investors in the economy.

He said the budget would achieve that by announcing bold and credible plans that would bring the debt level down to sustainable levels, boost revenues and narrow the fiscal deficit.

While expressing concern over the drop in the confidence of investors in the economy, resulting in the increasing sell-off of Ghana’s sovereign bonds in recent times, the minister said the government was well on track to meeting its targets for the year, hence the need for investors and the global community in general to have faith in the economy.

He said at the forum that efforts to reduce the deficit from 11.7 per cent of gross domestic product (GDP) in 2020 to 9.5 per cent of GDP this year were well on course.

The Minister of State disclosed that data from the ministry indicated that the deficit had narrowed to 9.4 per cent in September, below the period target of 9.9 per cent, while measures contained in the 2021 budget to boost revenue collection were also yielding the needed results, with the Ghana Revenue Authority (GRA) on course to achieve its target for the year.

The meeting, the last in the series for this year, was on the theme: “Pre-Budget 2022: Insight and Recommendation”.

The meeting was held at the plush Labadi Beach Hotel and streamed live on the social media networks of the Daily Graphic and Stanbic Bank Ghana and also broadcast live on Joy FM and Joy News.

The event brought together business leaders, policy makers, people in academia and business advocacy groups to explore the challenges facing the economy and proffer solutions ahead of the presentation of the budget on November 17.

Commenting on the rising selling of the country’s bonds in stock exchanges worldwide, Mr Boahen said it was surprising that investors across the globe were still losing confidence in the economy by selling off the bonds in the manner in which they were currently doing.

He said although the current sell-off of sovereign bonds was a global phenomenon, Ghana’s case was quite pronounced, raising concerns about the misalignment between the state of the economy and the sentiments of investors and the international market in general.

“I am sure you all notice the global sell-off in our Eurobonds in the international stock market.

There has been a general sell-off, but I am sure those of Ghana have been quite pronounced.

It is a situation that is of concern.

"I want to assure the audience that nothing fundamentally has changed.

The other speakers bemoaned Ghana’s inability to increase its revenue and further called on the government to speed up efforts to boost collections.

They said increased revenue was needed to reduce the pace of borrowing.

They cited the tax exemptions bill as one avenue to increase revenue without raising taxes.

The Managing Director of the Graphic Communications Group Limited, Mr Ato Afful, explained that the meeting was a platform for informed discussions on important topics that impacted on businesses and the economy at large.

He noted that it was to discuss the 2022 Budget with the view to making inputs that would influence the content, direction and discussion of the budget.

Mr Afful summed up the key expectation of industry players, which was to expect no new taxes in the 2022 Budget.

He said many Ghanaians were looking forward to a budget that would boost consumer confidence.

The Graphic MD explained that the 2022 Budget had implications not only for the business community but also the ordinary citizens of the country.

He called for a flood of ideas and approaches to help support the development of policies in the country.

That, he said, was because “Ghana is not the only country with increased debt levels, widening fiscal deficits and sluggish economic growth in the COVID-19 era”.

The breakfast meeting, which is an initiative of the GCGL and Stanbic Bank, is a series of dialogues that feature selected topics, with experts on the subjects as speakers.

The aim is to influence government policies in favour of businesses and the well-being of the economy.

Yesterday's meeting brought down the curtains on the series for the year.