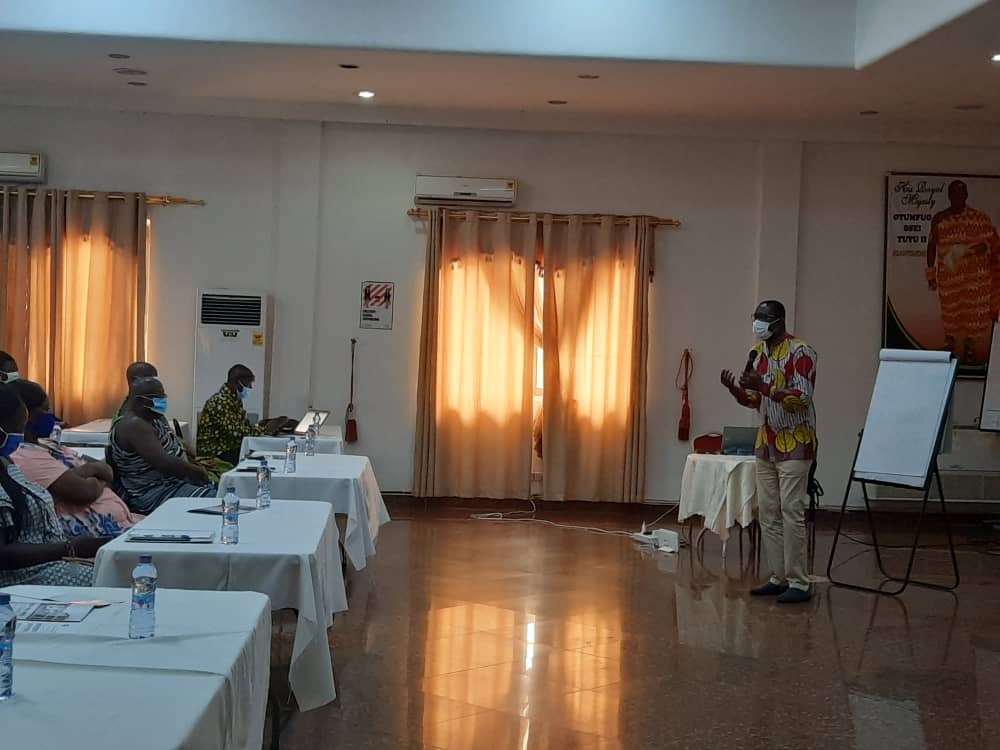 Mr Kirk Otoo, explaining a point to the participants at the Town Hall meeting in Kumasi
30.5k Shares

SOME Persons with Disabilities (PwDs) have raised concerns over the delay in accessing funds allocated to them through the District Assembly Common Fund (DACF).

The PwDs who engaged in town hall meetings in Accra, Kumasi and Tamale established that most of them had not received any funds from the DACF since 2019 due to the opaque style of disbursement employed for such distributions.

They insisted that the government must adopt the method of disbursement used in the Livelihood Empowerment Against Poverty (LEAP) programme to help ensure timely distribution of funds to vulnerable groups.

The town hall meetings, organised by SEND Ghana in partnership with UNICEF, was to help identify and discuss the impact of the COVID-19 pandemic and its related restrictions on the lives of the poor and vulnerable in the society.

It brought together PwDs, LEAP beneficiaries, Women and Adolescent groups and some traditional and opinion leaders to deliberate on how the COVID-19 pandemic had affected the general well being of people living in hardships and extreme poverty.

According to a survey by the Ghana Statistical Service, at least 77 percent of households experienced income decrease during the outbreak of the pandemic.

The study revealed that while household income was declining, public anxiety over the lockdown caused hikes in food prices.

About 77.4 percent of households were reported to have been severely affected by the increase in food prices.

Considering the above statistics, the government therefore launched a number of support schemes to help cushion the poor in society.

However, some of these supports, according to the persons who engaged in the town hall meetings, did not trickle down to the intended beneficiaries.

An example was the Coronavirus Alleviation Program Business Support Scheme which was launched in May 2020 by President Nana Akufo Addo to support businesses, individuals and livelihoods of the people.

Parliament also approved a ₵1.2 billion to support individual households and businesses out of which ₵600 million was earmarked to support businesses undergoing challenges as a result of the pandemic.

Recounting their survival strategies and their needs, some of the participants in all the three separate town hall meetings shared similar experiences bothering on non-access to funds earmarked to cushion them during the lockdown period and non-access to support from the general public which was forthcoming pre lock down period.

For instance, Ms Regina Ayensu recounted during a group discussion at the town hall meeting held in Accra on November 25 that although she was a leader of a group of PwDs, she had not received any tangible support from the government during the lockdown period following the outbreak of the COVID-19 pandemic.

“I’m from the Accra Metropolitan Area and I received a call which said I should compile the list of names of beneficiaries in my district and that they will be coming around to disburse the monies and goodies, until now I have not heard from them,” she said.

The plights of the participants were similar across the three regions where the town hall meetings were held.

Some of the participants said the pandemic and its associated restrictions had rendered some of them extra poor with difficulties to feed themselves and their families.

They explained that before the outbreak of the pandemic, they either engaged in petty trading or relied on the support from family and friend’s while others sought to beg on the street for their daily upkeep.

“Due to the restrictions and lockdown you couldn’t go and visit people who are even your family members and we were forced to stay home and starve,” another participant said at the town hall meeting in Tamale on November 30.

Asked if he didn’t have access to the free hot meals that were distributed by the government, he said the distribution was for people who had the strength to wait in long queues or those with the rights connections with politicians.

After the long discussions, it was evidently clear that the pandemic had worsened situations for the poor in society as most of them no longer engaged in their usual businesses or means of survival due to the new protocols associated with the pandemic.

“You see for the lack of funds many are going through more hardship and for those who resorted to the streets too life has changed for them since people are no longer interested in engaging beggars because of the pandemic,” Mr Kirk Otoo, a facilitator for SEND Ghana told the Daily Graphic on the sidelines of the Town hall meeting held in Kumasi on November 27.