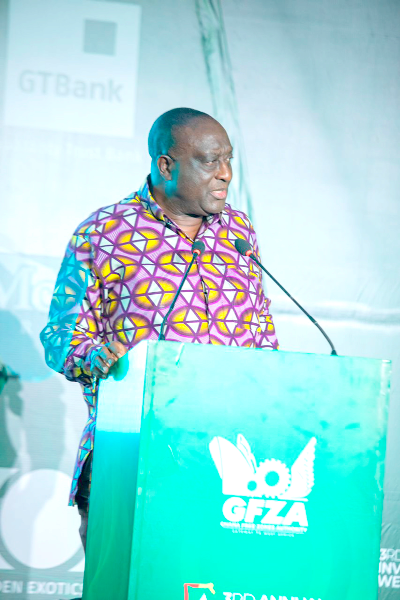 The Minister for Trade and Industry, Alan Kwadwo Kyerematen, has called on government agencies such as the Ghana Freezones Authority (GFZA) to expand their productive capacity across all industries of the economy.

That, he said will not only promote exports, but greatly encourage the processing of local agro and other intermediary products for manufacturing.

“Job creation is one of the major contributions of the private sector to which the government is committed to supporting through the free zones regime, and other projects. This will also help absorb the unemployment that the government’s freeze on employment may generate,” he said.

Mr Kyerematen made the call when he addressed a forum organised by GFZA as part of its third Annual Investment Week celebration which commenced on December 5 on the theme “GFZA: Championing Export-led Industrial growth in the context of AfCFTA and world trade”.

It brought together players in the trade industry to take stock and discuss issues of common interest to improve the operations of the free zones authority and enterprises as well as update businesses on new trends and policies that will have an impact on their operations.

Mr Kyerematen said the dire need for foreign exchange and Foreign direct investments (FDIs) in cushioning the economy can be greatly achieved through exports.

He explained that with the global crisis affecting the economies of the world, the need for increased production capacity of industries was a requisite to rise above the odds.

“There is, therefore, the need to promote exports as a nation now more than ever. As a country and a growing economy, we must be able to produce our basic needs, as well as have the abundance to promote exports for foreign exchange,” he said.

The Trade and Industry Minister said the ministry was currently working on a policy dubbed, Special Economic Zones, an upgrade of the free zone programme to ensure that the country was abreast of the trends.

“Most of the countries in Africa have shifted from pure export processing zones to special economic zones which is a broader concept in industrial development.

Development of other industrial parks and special economic zones will be designed to have the full supply chains and interrelated industries to create synergy within the zones,” he said.

He said in addition, the Ministry was also implementing other sector specific programmes such as the Automotive Assembly Programme.

He said the government has approved a new policy which seeks to support the local production and supply of components and spare parts for the automotive industry.

Mr Kyerematen said through that policy, it was expected that the automotive industry will have access to ready and locally manufactured spare parts which will also create more employment opportunities.

These programmes, he said presented investment opportunities for companies interested in this sector.

He added that the policy will be launched, and implementation will commence next year.

The Presidential Advisor for Media and Strategic Communications, Florence Oboshie Sai-Cofie, said the world events have shown that the way to go was export-led industrialisation.

She said the economic challenges the country was currently facing had heightened the need to move more rapidly towards transformation of the economy by renewing the focus on increased export promotion, which has contributed to the agenda for promoting and diversifying exports.

She said a National Export Development Strategy (NEDS) which is designed to propel the country, in the shortest possible time, to break the cycle of being a raw material producing and exporting economy with only limited levels of manufactured goods and services was being implemented.

She said it was expected that the strategy, with support of the government and the private sector, will begin to transform the structure of the economy from a raw commodity exporter to a manufacturing industrial export-driven economy.

For his part, the Chief Executive Officer of the GFZA, Mike Oquaye Jnr, said, “in Ghana, we currently have 217 active free zone enterprises.

Cumulatively, the free zone enterprises have made export earnings of over $27 billion employing about 33,000 people directly with over 31,000 being Ghanaians.”

He said “these are impressive achievements, and I would like to take this opportunity to appreciate your contribution towards the development of the Ghanaian economy.”

Mr Oquaye said; “The time to walk the talk is now and the GFZA is ready to take this charge in tandem with AfCFTA Secretariat and the Ministry of Trade and Industry (MOTI),” he said.