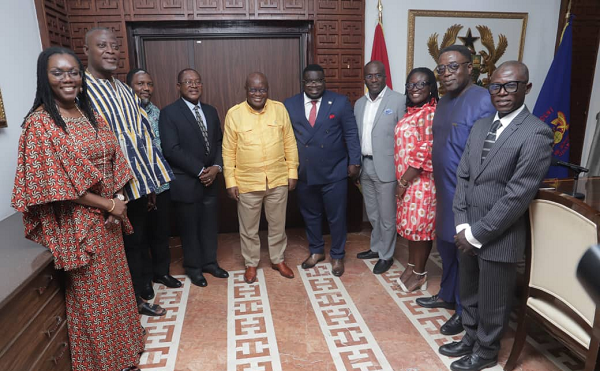 The Managing Director of the Ghana Post Company, Bice Osei Kuffuor, has made an appeal for a presidential directive to Ministries, Agencies and Departments (MDAs) to use the services of the company.

He said the company had transformed into an efficient, effective and modern entity with the capacity to deliver to wean itself off government support, pay its debt, break even and pay dividend to support government revenue for development, which called for support from public institutions

Mr Osei Kuffuor, popularly known as Obuor, made the call when members of the board of directors of the Ghana Post paid a courtesy call on President Nana Addo Dankwa Akufo-Addo at the Jubilee House last Thursday.

He said the government business constituted just three per cent of its revenue and if that was reversed to make the government agencies and departments to resort to the efficient services of the company, it would make a huge difference.

He cited a recent discussion with some of Ghana’s missions abroad which revealed that some spent not less than $500 on courier services every week, sending letters to or from the Ministry of Foreign Affairs.

Mr Osei Kuffuor noted that a study the Ghana Post conducted revealed that the Kenya Post received 45 per cent of its revenue from government business; Lebanon, 55 per cent; Japan, 80 per cent, making them profitable.

He said the company was currently running 360 post offices, out of which 330 were extremely active but out of this 330, it was only 94 that were profit-making.

Mr Osei Kuffuor said hanging in the company’s books was a legacy debt of GH¢40 million which was made up of GH¢8 million owed to the Ghana Revenue Authority; Gh¢5 million to SSNIT and end of service benefits owed to old staff because the organisation did not have liquidity.

Mr Osei Kuffuor suggested that if the debt could be turned into equities or government found a way to capture it to offer the organisation some breathing space, it would save it the monthly payment of GH¢500,000 to SSNIT and GH¢800,000 to the GRA, all as ways of defraying the old debt.

President Akufo-Addo, for his part, said he was not surprised about the changes that were taking place at the Ghana Post because the Minister of Communications and Digitalisation, Ursula Owusu Ekuful, was concerned and followed the possibilities of the organisation, and had been discussing with him.

“I am not surprised at the changes taking place and also the trajectory of your [Obuor] thinking,” the President stated and noted that the request made was possible and that the sector minister knew what to do to bring it up for consideration.

He noted that it made sense to him to pay a public sector business owned and controlled by the government to offer a service to it than to offer it to the private sector, provided the public sector organisation had the capacity, competence and quality.

He said if the public sector would also take three times more than the private sector, the business would definitely go the private sector because people were looking for efficiency that was not at a higher cost as well.