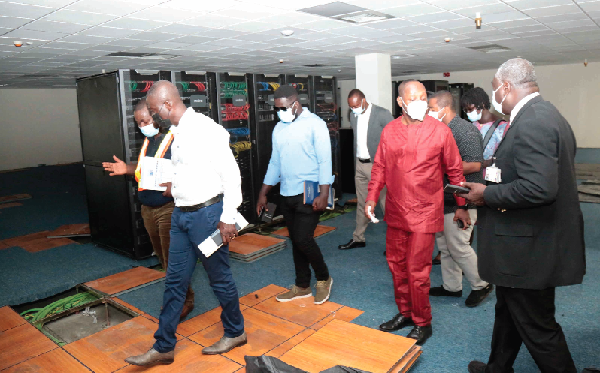 Mr Akoto Bamfo (2nd left), Consultant for the project, interacting with Mr Prosper Amemode (left), a Principal Planning Officer, Ministry of Transport, during the project monitoring. With them are a delegation from the ministry and GCAA including Mr Daniel Acquah (right), Deputy Director-General, Technical, GCAA.

The Ghana Civil Aviation Authority (GCAA), is seeking $10 million to enable to complete an office complex to house the Air Navigation Services Agency (ANS) and its new navigation equipment.

The multi-million project stalled after the coronavirus (COVID-19) pandemic wiped away the Internally Generated Funds (IGF) of the GCAA which was being used as a source of funding for the project.

The revenue collected by the authority from air travel and other resources was blocked in 2020 following the closure of the Kotoka International Airport (KIA) to commercial flights for six months as part of restrictions on movement to contain the spread of the COVID-19.

The situation has subsequently delayed the office complex project which is currently about 92 per cent complete.

Subsequently, the GCAA has started a search for a loan facility to fully complete the project to serve its intended purpose.

The authority is targeting financial institutions in and outside the country to raise the funds for the project.

The Deputy-Director General in charge of Technical at the GCAA, Mr Daniel Acquah, who made this known to the media when a delegation from the Ministry of Transport paid a working visit to the project site at KIA on Monday, October 4, observed that the project would deteriorate if funds were not raised on time.

The visit to the ANS office complex was part of the ministry’s initiative to visit ongoing project sites of the various agencies under its jurisdiction.
The exercise, named “Monitoring Visits to Project Sites”, will span between October 4 and 11, 2021.

“The building was expected to be completed by now but for the outbreak of the pandemic which depleted our finances after the country closed its airports.

“When the airports resumed operations in September 2020 until now, airlines are still not back to full capacity and the GCAA generates revenue from the travels and navigation of the airspace, so, since we are not operating at full capacity, it has affected the funding of the project.”

He said that was why the GCAA begun a search to secure $10 million to complete the project.

The need for a new office complex for the ANS follows the passage of the Air Navigation Services Agency Bill in November 2020 that created an autonomous and independent entity out of the current GCAA.

Despite the benefits and recommendations by major global agencies of aviation including ICAO, the Universal Safety Oversight Audit Programme (USOAP) and the Civil Air Navigation Services Organisation (CANSO) for the separation of the ANS function from the regulatory role of the country’s GCAA, it has been on the drawing board since 2006.

Planning for the future

Mr Acquah stated that the new office complex had become necessary because the industry was expanding and needed the facility to have more equipment in order to be efficient in managing air traffic.

“The existing air navigation office is okay but we are just planning ahead of the future and so the GCAA is about to decouple into two separate entities. It used to be one entity and we decoupled the management of the airport from the authority in 2007 to establish the Ghana Airports Company Limited (GACL).

The GCAA is expected to be a regulator and so being a player in the same space is not the best practice and that is why the air navigation functions will soon be separated as well,” he said.

The Consultant for the project, Mr Akoto Bamfo, stated that the new office was meant for air navigation purposes with equipment to monitor and assist air traffic engineers to do their work.

He said the project, which was about 92 per cent complete, began in 2017 and was expected to be completed in the next six month if work goes as planned.