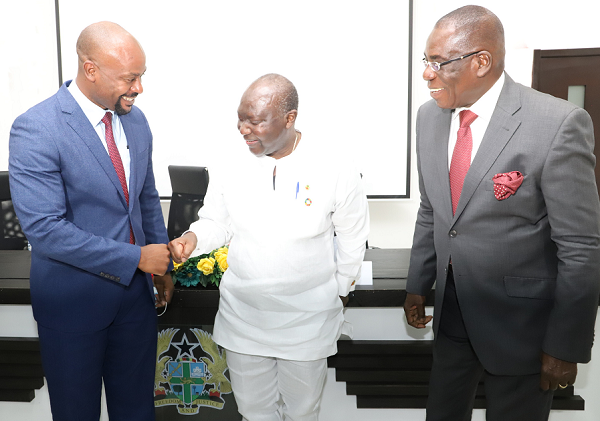 The Minister of Finance, Ken Ofori-Atta, has called for urgent reforms in the conduct of international credit rating agencies (CRAs).

He said doing that was important, given their ownership structure and the ramifications that their actions had on sovereign states, especially in Africa.

"We need to go into emergency mode to reform the global financial architecture," he stressed.

Mr Ofori-Atta said this when he delivered the keynote address to open a two-day sensitisation meeting on the African Peer Review Mechanism (APRM) support for member states on international CRAs in Accra on Thursday March 17, 2022.

The two-day meeting, organised by the Ministry of Foreign Affairs and Regional Integration, in collaboration with the APRM, will engage key stakeholders on credit ratings to discuss various challenges the member countries, including Ghana, were facing with the agencies, as well as their impact on corporate governance and reforms to improve competitiveness in the private sector.

It is being attended by representatives from the Bank of Ghana, the Securities and Exchange Commission, the Ghana Stock Exchange, the Ghana National Chamber of Commerce and Industry, the African Continental Free Trade Area (AfCFTA) Secretariat, among others.

The meeting comes on the heels of a recent rating by Moody’s, one of the international CRAs, that downgraded Ghana's long-term issuer and senior unsecured bond ratings to CAA1 from B3 and changed the outlook from negative to stable.

Mr Ofori-Atta stressed the need for governments in Africa and their peoples to begin to speak with one voice to bring about changes in the world economic order that had always placed the continent at a disadvantage on the international market.

He said there was an urgent need for reforms in the global financial architecture to enable the continent to access funds on the international market to rebuild its economies and address the issues of poverty and climate change in the midst of the COVID-19 pandemic that had wreaked havoc on the economies of the world, especially Africa.

He said between 1949 and 2021, African countries had been less often upgraded significantly, compared to other regions.

In the case of Standard and Poor’s (S&P) ratings, for example, only 1.1 per cent of African sovereigns rated in the ‘B’ category (which form the majority of rated African sovereigns) were upgraded to BB, Mr Ofori-Atta noted.

Mr Ofori-Atta said some countries had reneged on servicing their debts on the international market, saying Argentina had reneged on its debt on nine occasions.

However, that country issued a 100-year bond in 2017, with a coupon rate of seven per cent, which was oversubscribed.

"Alternatively, take Ghana and Greece, for instance: In 2020, a 29-year, $1-billion Eurobond issued by Ghana had a coupon rate of 8.95 per cent. Essentially, Ghana would pay $89.5 million in coupons per year, which translated to a coupon of $2.6 billion over the lifetime of the bond.

That, Mr Ofori-Atta said, meant that despite Greece defaulting on its debt as recently as 2015, it was paying €47 million (or approximately $53.6 million) for its debt.

Based on the above analysis, the Finance Minister questioned what exactly the “risk” was that was being built into the models that caused Ghana to pay an additional $35 million per year, compared to Greece, on a 30-year facility.

Establishment of an African credit agency

The Chief Executive Officer (CEO) of the APRM, Professor Eddy Maloka, said the APRM was tasked by the Specialised Technical Committee of Finance Ministers in 2018 to undertake a feasibility study for establishing an African CRA and it found it feasible.

"We are in the process of working on the legal, structural and financial implications of establishing an African CRA as an entity of the union, and we will be reporting the outcomes to the ministers’ committee later this year," he added.

The Minister of Foreign Affairs and Regional Integration, Shirley Ayorkor Botchwey, in a speech read on her behalf by one of her deputies, Kwaku Ampratwum-Sarpong, added her voice to calls for Africa to have its own credit rating institution.

The Chairperson of the Governing Council of the National African Peer Review Mechanism, the Most Rev. Prof. Emmanuel Asante, in an address read on his behalf, expressed the hope that the outcome of the meeting would bring about a change in the narrative of corporate governance and credit rating in Africa.

Credit rating agencies, such as Moody's, Standard & Poor's and Fitch, provide investors with information on whether bond and debt instrument issuers can meet their obligations.