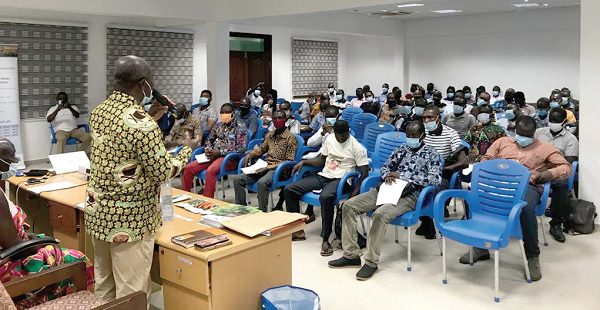 The Ghana Cocoa Board (COCOBOD) has introduced a new agro-chemical that treats soil acidity and improves yields on cocoa farms.

The chemical, known as Omya Calciprill, is a high quality soil conditioner from Germany that rids soils of their acidity, leading to increased yields as well as improved crop quality.

A pilot test conducted by some farmers in the Western and Western North regions showed that Omya Calciprill reduced the acidity of the soils to acceptable levels on cocoa farms and increased yields by 70 per cent within two years of trials.

The field study was supported by the Cocoa Research Institute of Ghana (CRIG).

Beft Agro Limited, the producer of Omya Calcipril, has worked closely with the Ministry of Food and Agriculture and COCOBOD for many years to ensure excellence in crop and cocoa production.

This came to light at a two-day training seminar organised by the Seed Production Division (SPD) of COCOBOD for some cocoa farmers at Kejebril and Wassa Akropong. At the seminar which began last Wednesday, the significance of Calciprill and the effects that acidic soils have on cocoa production was explained to the farmers.

Speaking to the Daily Graphic after the seminar, the Cocoa Health and Extension Division (CHED) Manager for COCOBOD’s Western South Region, Mr Samuel Asare Ankamah, explained that applying Omya Calciprill to the soil boosted its quality and improved its fertility as well.

He said COCOBOD’s Western South Region was the hub of cocoa farming in the country, hence the need to ensure that the soil was provided with essential nutrients favourable for improved cocoa production.

Mr Ankamah said after a year of applying Omya Calciprill, the cocoa farmers attested to a boost in cocoa yields.

An agronomist with Omya West Africa, Mr Daniel Attivor, said farming had been modified significantly and as such urged farmers to embrace change.

“The fact that there is land available does not mean that we can plant anything on it.,” he told the farmers.

He said there was the need for farmers to see agriculture extension officers as key stakeholders who could help them identify soil types and the uses to which they could be put.

Mr Attivor explained that the seminar was conducted to help the farmers understand that acidic soils with low PH could hinder the effectiveness of fertilisers applied until they neutralised in the soil.

He said it was important for farmers to know the nature of the soil they were working on before applying fertiliser in order to achieve the desired production level.

The Operations Manager of Demeter Ghana, an agricultural input and specialist services provider in the country, Mr Nick Parish, said the company was happy to be associated with the project.
adding that Demeter Ghana would continue to support farmers in the effort to boost cocoa and food production in the country.

He said the seminar was the second for the cocoa farmers in the region following the renewal of the partnership between COCOBOD and Beft Agro Consult Limited, distributor of fertilisers in the country.

Mr Parish said studies had shown that soil acidity was a major constraint to cocoa cultivation and also had a negative impact on key nutrients such as nitrogen, potassium and phosphorus in the soil, leading to low cocoa yields.