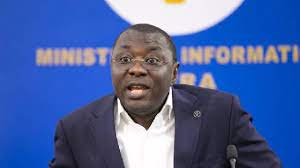 A Deputy Minister of Energy, Dr Mohammed Amin Adam, has said the government will continue to explore comprehensive and viable options to cater for the Ghana’s transition from fossil fuels to renewables.

He explained that the country was already putting in place measures that would ensure seamless energy transition, as Ghana joins in the race for net zero carbon emission.

He said key of these measures was the setting up of a National Energy Transition Committee (NETC) with the aim of developing a national energy transition policy.

Speaking to the media at the launch of the 2019 Ghana Extractive Industries Transparency Initiative (GHEITI) reports in Accra on April 14, 2022, Dr Adam insisted that Ghana would transition from fossil fuels at its own pace.

The reports are Mining and Oil/Gas EITI published by the Multi-Stakeholder Group (MSG) of the GHEITI.

The MSG is a tripartite body made up of the government, industry and civil society, with responsibility of steering the affairs of GHEITI.

The compilation of the 2019 report brings to 16, the total number of mining reports so far produced and published since Ghana acceded to the initiative.

The deputy minister said energy transition was a very important issue for the government and that was why it set up a committee to develop Ghana’s transition policy and strategy.

“So that we can transition at our own pace because it is like we are being rushed into it.

“Most of the developed countries who have benefited from fossil fuel have developed their countries based on the natural resources,” he said.

In Ghana’s case, he said oil was discovered in commercial quantities a few years ago and the country was being encouraged to transition to renewables.

“It took the world over 75 years to move from coal energy to fossil fuel yet we are being encouraged to take just 30 years to move to clean energy,” he said.

Dr Adam stated that the country would continue to produce oil and gas because it needs revenue to support its developmental agenda.

As a result, he said the government would deploy mitigation programmes such as planting of trees and adherence to zero fleeing policy for gas.

“These are some of the measures we think we can implement to reduce our mitigation but at the same time continue to produce our natural resources,” he said.

Launching the reports, the Deputy Minister of Finance, Dr John Ampontuah Kumah, said $666.39 million accrued to the states in 2020 from royalties, carried and participating interest (CAPI), corporate income taxes (CIT) and surface rentals in the oil and gas sector.

He said the government also received $225,301 as income earned on the petroleum holding fund (PHF).

“The petroleum sector's total receipt of $666.39 million in 2020 contributed seven per cent of total government (domestic) revenue for that year.

“3,711 employees were engaged in the upstream petroleum sector, 3,211 being Ghanaians and 500 expatriates as part of efforts by the government to reduce the unemployment rate in the country,” he said.

The Swiss Ambassador to Ghana, Philipp Stalder, said the extraction of natural resources, if carefully done, should lead not only to economic growth but also social development.

However, he said when poorly managed in many countries it has often led to corruption and the rise of unrest and conflicts among different segments of society.

“Through the Extractive Industries Transparency Initiative (EITI) process, adhering member states have become accountable for the management of their natural resources by complying with a global transparency standard,” he added.