Economic recovery will be prolonged — BoG 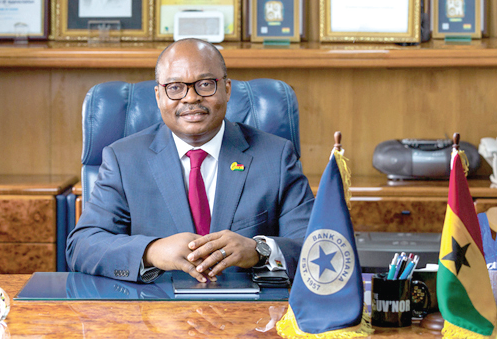 The Bank of Ghana (BoG) has expressed fears that economic recovery from the havoc wreaked by the COVID-19 pandemic will take longer than initially anticipated.

It said although economic activities had picked up quite well following contraction in the second and the third quarters of last year, the resurgence in the pandemic earlier this year had heightened the uncertainty around recovery and growth.

In a press statement issued last Monday after the first meeting of the Monetary Policy Committee (MPC) in the year, the Governor of the BoG, Dr Ernest Addison, said the renewed threat posed by the second wave of the pandemic risked slowing down the pace of economic recovery in the short term.

“In the domestic economy, growth has picked up since the sharp contraction in the second quarter of last year. All the high-frequency indicators of economic activity have rebounded; consumer and business confidence levels are back at pre-lockdown levels and there are indications of a steady growth in private sector credit.

“However, the renewed threat from the second wave of the pandemic has again heightened uncertainty and could hamper the recovery process in the near-term,” the press statement, which also announced the decision of the MPC on the bank’s policy rate, said.

The BoG maintained the policy rate at 14.5 per cent for the fifth time in a row, citing the need to help ease the pressure on inflation and support economic recovery efforts.

The central bank’s fears come at a time when the COVID-19 daily infection rate, the number of infected persons requiring intensive care and the number of people succumbing to the virus have all assumed grim milestones.

The situation has forced the government to re-impose restrictions on some daily routines and social activities in an attempt to contain the spread of the virus and mitigate the impact on the economy.

While announcing the reimposition of some of the restrictions, President Nana Addo Dankwa Akufo-Addo said last Sunday night that Ghana’s COVID-19 situation had worsened, with daily infection and death rates, as well as the number of infected persons requiring intensive care, hitting record levels.

He said daily infection had risen to 700 cases, compared to 200 cases a week earlier.

He said hospitals were now full, forcing the government to reactivate isolation centres to be able to deal with the high numbers.

Beyond slowing down the pace of economic recovery, the statement said, the second wave also meant that the economy was likely to record a larger deficit this year, which would be financed by borrowing.

It explained that fiscal correction, which was needed to reduce the deficit by lowering the borrowing rates, was now unlikely, as the second wave meant that more public spending would be required to undertake testing and contact tracing, buy vaccines and fund other efforts meant to contain the spread of the virus.

“The prospects of a sharp fiscal correction in 2021 now look unlikely, amidst the second wave of the pandemic, which will be requiring additional spending to provide testing, vaccines, etc,” it said.

It also called for new measures to maximise revenue collection and rationalise expenditure, in line with targets.

“To put debt on a sustainable path and ensure sustainability in policies, some new revenue measures and expenditure rationalisation efforts will have to be pursued within the context of the medium-term fiscal framework to allow for the generation of primary surpluses,” it added.

The Ghana Revenue Authority (GRA) has set an ambitious target of collecting GH¢60 billion this year, about 33 per cent higher than the GH¢45.7 billion it collected last year.

On the execution of the budget, it said provisional data from the Ministry of Finance showed that the deficit on cash basis was 10.8 per cent of GDP, against the target of 11.4 per cent of GDP for the year.