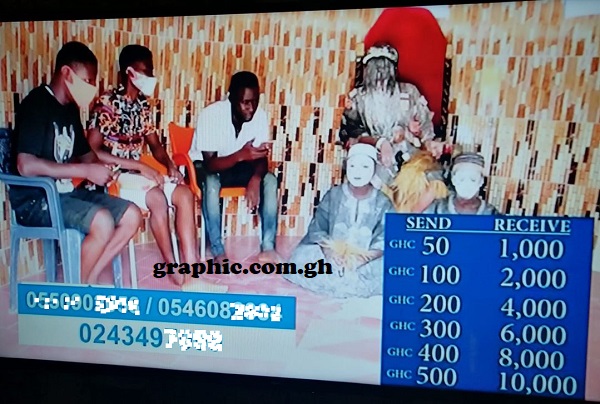 A screen grab of a money doubling broadcast

The Bank of Ghana has notified all media outlets not to allow the broadcast of illegal money doubling and credit card loading schemes on their platforms.

This the Bank says is because no entity or individual has been licensed to engage in that business in the country.

In a statement, the BoG explained that “Money Doubling”, “Card Loading” and “Credit Card Loading Systems” amount to deposit-taking, under the Banks and Specialised Deposit-Taking Institutions Act, 2016 (Act 930) and under Section 4 of Act 930 only entities licensed by the Bank may carry out deposit-taking business.

"By this notice, the Bank of Ghana informs the general public that the Bank has not licensed any entities or individuals engaged in “Money Doubling”, Card Loading” and “Credit Card Loading Systems”. The said individuals and entities in question, commit an offence and will be required to return all funds received," the BoG statement said.

"Members of the public are reminded to place deposits only with institutions licensed by the Bank of Ghana, in order that they may be accorded the protection available under the banking laws.

"The Bank of Ghana wishes to notify all media outlets including radio, television and online channels NOT to permit the advertisement of “Money Doubling” and “Card Loading” or “Credit Card Loading Systems” on their platforms. The media is encouraged to verify the licensing status of such entities with Bank of Ghana, before advertising their products and services.

"The general public is encouraged not to engage in such activities and to report such illegal activities to the Bank of Ghana..."

The BoG said it will not hesitate to seek the assistance of law enforcement agencies to arrest and prosecute persons who are found culpable who when convicted will be liable to fines and jail terms ranging between two and four years.

The Bank of Ghana also warned the public against engaging the services of the money doublers and credit card loading systems who advertise their services on traditional and social media platforms.

The broadcast of the activities of money doublers and credit card loaders have been on the rise over the past year with many broadcasts on digital television platforms.

The broadcasts usually operate on a similar format with a fetish priest or Mallam and an assistant offering the promise to double a sum while deposit numbers scroll on the screen.

In May this year, their activities came to the notice of the Minister of Information, Mr Kojo Oppong Nkrumah who confirmed that he had petitioned the BoG and the National Media Commission on the worrying development.

He tweeted: “I have written to the Bank of Ghana (BoG) and National Media Commission (NMC) to take note of the activities of money doublers on TV and act as appropriately to tackle it. The Ghana cedi which is produced under the authority of the BoG cannot and ought not be duplicated”.