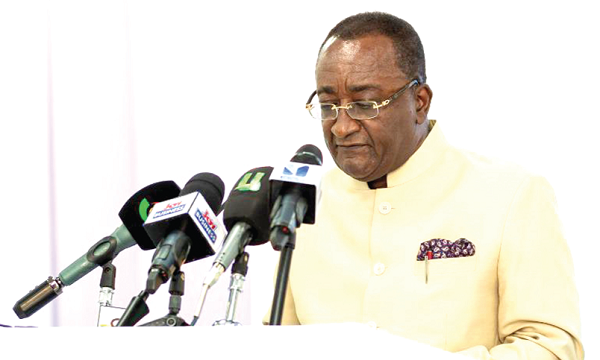 Dr Owusu Afriyie Akoto, Minister of Food and Agriculture, giving his address after the signing of the agreement

The Ghana Cocoa Board (COCOBOD) has secured a $1.5-billion syndicated loan to finance cocoa production and purchase for the 2021/22 cocoa season.

The loan, which is being secured from a consortium of 28 local and foreign banks, will attract interest of 1.1 per cent plus libor rate, a benchmark rate at which some of the world’s leading banks charge one another for short-term loans.

The lead arrangers of the loan are Standard Chartered Bank (SCB), the Ghana International Bank, NEDBank, Natixis Bank, the Industrial and Commercial Bank of China, Rabobank and the MUFG Bank.

The facility is repayable in seven equal instalments from February to August 2022.

The Chief Executive Officer of COCOBOD, Mr Joseph Boahen Aidoo, signed on behalf of the COCOBOD, while representatives of the participating banks signed for their respective banks.

For the second year in a row, the signing was done virtually due to the COVID-19 pandemic.

Mr Boahen Aidoo described as consistent and enormous the support COCOBOD had received from its financial partners over the years.

He assured the partners that the loan would be used for its intended purpose and repaid as scheduled.

“Our track record remains unblemished and we shall do everything possible to pay as planned,” he added.

He said COCOBOD’s target of improving cocoa productivity per hectare to 1,500kg by 2025 would be realised, and that, currently, cocoa farmers who embraced the hand pollination, mass pruning, irrigation, fertilizer application and mass spraying programmes had significantly increased their productivity levels from 450kg per hectare to around 1,000kg.

He said COCOBOD had not only scaled up the rehabilitation of cocoa farms to treat 156,000 hectares of diseased and overage cocoa farms in the country but also increased the number of hybrid seedlings to be produced to about 140 million for the 2021/2022 crop year.

“The seedlings will be raised through new technologies which guarantee respect for the environment and biodiversity conservation,” he added.

According to the CEO, Ghana would, for the first time, roll out a cocoa farmers’ pension scheme on October 1, 2021, the beginning of the new cocoa season.

He said a recent piloting of the scheme, involving some 2,800 volunteer farmers in the New Edubiase District in the Ashanti Region, had been successful.

She said the loan was one of the most sought after soft commodity syndicated financing in Africa, with an impeccable record of repayment.

The CEO said this years’ facility, which saw 28 geographically diverse banks participating, was a reflection of COCOBOD’s strong appeal to international investors, as well as its impressive credit story.

“The facility received commitments in excess of $1.7 billion, which is a testament to COCOBOD’s credit profile and market relationship,” she added.

According to Mrs Nettey, the senior mandated arrangers who joined the facility as early bird members committed as much as $515 million, with the remaining $544 million additional commitment coming from the general syndication.

For his part, the Minister of Food and Agriculture, Dr Owusu Afriyie Akoto, gave an assurance that COCOBOD would use the money for the intended purpose — to ensure prompt payment of farmers at the point of sale.

He said following the implementation of pragmatic programmes and policies, coupled with the contribution by the industrious farmers, Ghana was able to set another cocoa production record of 1.045 million metric tonnes for the 2020/21 season.

“We are committed to making the cocoa sector a prominent industry for the economy; we will not take our eyes off the policies that will help develop the industry and make it more attractive,” the minister added.