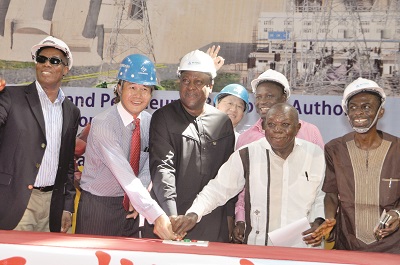 May 3, 2013 marked another important day of mutually beneficial Sino-Ghana cooperation.

The day witnessed the inauguration of the first turbine of the Ghana Bui Hydroelectric Power Station, financed and built by China, which started generating electricity to add 133 megawatts to the country's national grid.

President John Dramani Mahama, accompanied by a number of central and local government officials, and the Chinese Ambassador to Ghana attended the inauguration.

Funded with a combination of concessional loans and buyer's credit by the China Export-Import Bank and constructed by China Sinohydro Corporation, upon completion of all three turbines by the end of this year,  the Bui Power Station, with a total capacity of 400 megawatts, will become the second largest hydroelectric power station in Ghana.

In his inaugural address, President Mahama expressed his heartfelt thanks to the government and people of China for their support to Ghana's economic and social development, saying that this project would bring new impetus to the friendly relations between the two countries.

For years, Ghana's development agenda has been held back by serious power shortages. The situation has improved a little since the natural gas operated by the Sunon Asogli Power Plant, co-founded by a Chinese company and financial institution, came into operation in 2010. The completion of the Bui Hydroelectric Power will not only put an end to the power shortage in Ghana, but also benefit the neighbouring countries as well.

Up to now, the Chinese and Ghanaian technicians and workers have been working together on the Bui project for more than five years, during which more than 6000 Ghanaian workers have received training in hydroelectric power station construction.

The Bui project is the epitome of fruitful cooperation between the two countries in fields such as infrastructure, agriculture, telecommunication and aviation. In 2008, Ghana hosted a successful   African Cup of Nations. A Chinese company constructed two of the four stadiums for the games thus contributing to the joy and fun of football lovers from Ghana and other African countries.

In accordance with the agreement signed in 2010, the China Development Bank will provide $3 billion to finance infrastructure projects in Ghana. Many Chinese agricultural experts are now working in Ghana to transfer rice planting and aquacultural technology. Telecommunication and internet facilities in Ghana have been greatly improved thanks to participation  of Chinese enterprises. Furthermore, China Hainan Airlines has chosen Ghana as its first African investment destination.

Today, if you are travelling from Accra, the capital of Ghana, to Kumasi, the country's second largest city, you could fly with a joint airline by Hainan Airlines and its Ghanaian partner, which was once unimaginable.

Ghana is one of the first sub-Saharan African countries to establish diplomatic relations with China. The long-lasting development of mutually beneficial cooperation has further strengthened the traditional friendship between the two countries and their peoples. When my friends and I stroll in the streets of Ghanaian cities, many local people warmly greet us in Chinese. They are so lovely, just like our brothers and sisters in the neighbourhood.

Almost all the Chinese delegations to Ghana would visit the Kwame Nkrumah Mausoleum, where the mortal remains of the late President of Ghana and one of the pioneers of African independence movement have been laid to rest. In the showroom of the Mausoleum you could still find the photos of Chairman Mao Zedong and other Chinese leaders meeting with President Nkrumah. Actually it is President Nkrumah who initially put forward the idea of building the Bui Hydroelectric Power Station. With the concerted efforts of generations of both countries, this great dream will soon come true.

Of course, problems are inevitable in cooperation and exchanges  against the general background of dynamic development of bilateral relations. For instance, some Chinese citizens are now involved in illegal gold mining in Ghana, which has quite a negative impact on the local environment and social stability. Many of my friends coming back from Ghana told me about that and also discouraged illegal gold mining activities in their own ways including leaving on-line messages, hoping this problem could be solved soon. The good news is that both the Chinese and Ghanaian governments have already started close cooperation aimed at finding a comprehensive resolution of the problem.

We have a list of reasons to be confident of the bright prospect of Sino-Ghanaian relations. People of both countries are unswervingly pursuing their happy lives. The Ghanaian people are making efforts to build a Better Ghana, while the Chinese people are striving to realise the China Dream.

With solid foundation and strong complementarity, the bilateral cooperation will surely meet with an even more splendid future.  Therefore, we are fully convinced that with sincere efforts by the two sides, the dreams of the two peoples will eventually come true and the relationship between the two countries will move ever  forward like the Yantze and Volta rivers.

The author is a Beijing-based scholar in international relations.