Bank customers asked to report illegal charges slapped on them 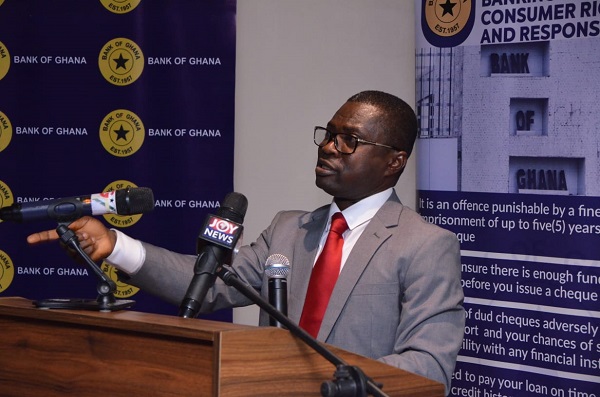 Bank customers have been advised to report any financial institution that charges fees that have not been sanctioned by the Bank of Ghana (BoG) the industry regulator.

On banking services and consumer rights and responsibilities, the programme formed part of the bank’s awareness creation initiative to increase the needed consciousness on key financial consumer protection issues to enhance consumer confidence in the banking sector.

The BoG, in its presentations, said when customers reported those anomalies to the BoG, it would take measures to ensure that the customer got a refund of such charges.

Mr Assan said an engagement to ensure financial literacy and sensitisation was imperative to ensure that stringent efforts were made to create the needed awareness to boost consumer confidence.

Mr Assan said there had been an increase in the number of complaints lodged against licensed institutions in respect to products, services and practices.

The regional manager explained that most of those complaints bordered on issues such as non-disclosure of key information, wrongful application of interest on loans, imposition of unexplained charges, payment of remittances to wrong beneficiaries and other forms of financial fraud.

A critical observation made from the complaints, he said, could be attributed to the knowledge gap in financial and banking related issues on the part of some consumers of financial products and services.

For his part, the Head of External Dispute Resolution of the bank, Rev. Kwasi Twum, took the participants through the critical role the Ghana Immigration Service played in the fight against money laundering and other cross-border crimes.

Rev. Twum said as a result the GIS had become a very important stakeholder, for which reason the knowledge of officers on the financial sector should always be enhanced.

The Deputy Western Regional Commander of the Ghana Immigration Service, Assistant Commissioner of Immigration (ACI) Beatrice Okpoti, welcomed the initiative by the BoG and noted that the sensitisation would further enhance the service’s drive to curb financial irregularities at the borders.

The deputy regional commander said considering the fact that the world had become a global village, “it is very important for law enforcement officers to understand the country’s financial legal framework and systems to help in the fight against money laundering and other cross border crimes.”

She expressed the hope that the training would empower officers to be extra vigilant when engaging in financial investment activities with companies in the country, saying “the training would strengthen the existing collaboration and cooperation between the GIS and the Bank of Ghana.”

The officers were given the opportunity to ask questions on activities that will enhance what to look out for and ensure that the country’s interest was protected.