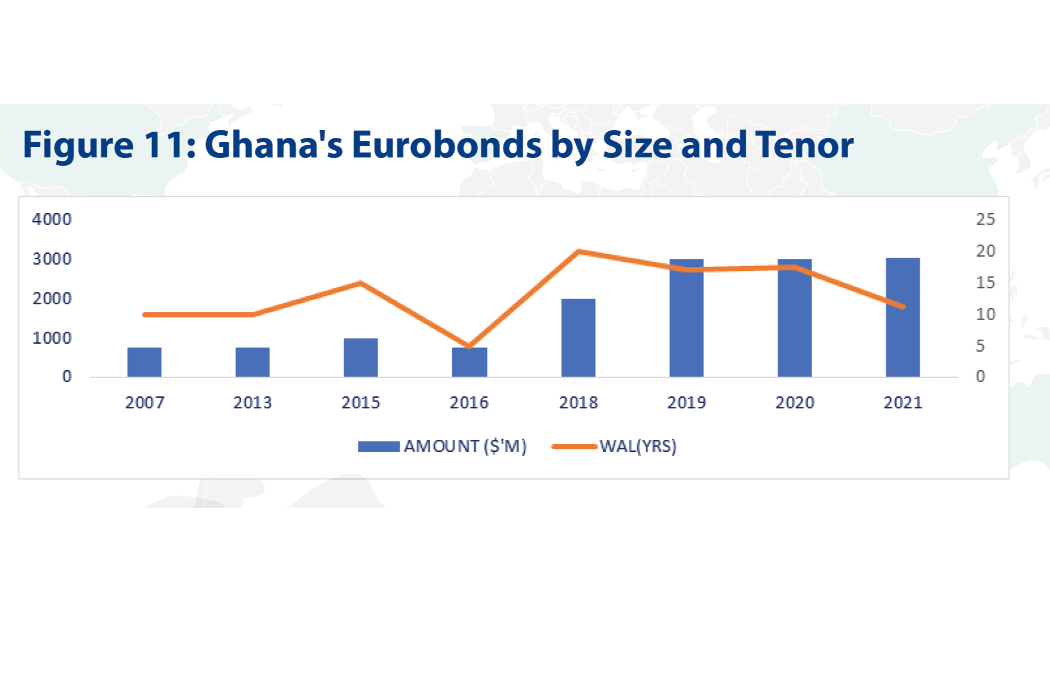 According to the current Government, funds generated from the international capital market, in addition to the loans from other new bilateral lenders including China, Kuwait, South Korea, and Brazil, have been used to finance infrastructural development and refinance maturing debt.

In particular, the refinancing of short-term domestic debt, a form of debt-juggling.

Recent engagement in the international capital market is in line with this strategy.

Below, we provide a detailed review of Ghana's involvement in the international capital market and loans contracted from China.

Ghana went into the international commercial capital market for the first time in 2007, to obtain Eurobonds, and by the evidence from the ensuing years.

Since then, Eurobonds have quickly become a routine part of the country’s financing strategy

Drivers, opportunities, and risks of Eurobonds

A seemingly insurmountable challenge that successive managers of the Ghanaian economy have to confront is how to widen the tax base, a consistent theme in the efforts to mobilize revenue and balance the books.

Reining in public expenditure remains an unattainable goal given a significant portion of government expenditure is non-discretionary.

Borrowings, including Eurobonds, are frequently used to address the resulting fiscal deficit.

It is worth noting that in recent years some of the Eurobond proceeds have been used to pay previous debt obligations to US$1 billion were to be used to redeem more expensive earlier issuance and pay domestic debts with higher interest costs.

●Accessing the international credit market imposes self-discipline on countries as they know investors, rating agencies, and analysts are closely watching the country's economic management. As a result, any deterioration in economic fundamentals will lead to downgrades which negatively affects yields on existing bonds and drive-up costs of any future issuance.

● Sovereign bonds could be a cheaper and more flexible source of financing long-term infrastructure projects. Conversely, Eurobonds can potentially have significant risks for issuers. If these risks are not properly managed, it could negate any advantages envisaged. Some of the risks are:

● Public debt can easily spiral out of control, especially where the requisite debt management capacities have not been developed prior to venturing into the international capital market. This is particularly critical in sub-Saharan African countries like Ghana, with historically weak fiscal institutions, low efficiency of public expenditure management, and governance challenges.

● Increased currency risk as the portion of foreign currency-denominated public debts increases. The situation could be worsened if repayment obligations fall due during times of strained economic conditions. This is especially so for primary commodity-dependent states like Ghana.

●Going into the international private capital market may result in reduced access to concessionary funding.

●Like other forms of capital flow, Eurobonds could pose challenges to the conduct of domestic monetary and exchange rate policies. The inflow of proceeds from Eurobonds could increase available foreign currency in the domestic economy, and this could strengthen the local currency leading to exports becoming expensive. A defined public debt management strategy is necessary for the effective management of Eurobonds to seize the opportunities therein while mitigating the potential risks.

Every bond has unique characteristics that set it apart from others. From the issuer, size, tenor, issue price, coupon rate type, coupon frequency to principal liquidation approach is amongst the factors that give bonds their identity and determine the costs to the issuer (discounts/premium + coupons) as well as returns to the investors.

The sovereign rating of Ghana as an issuer by the three major international rating agencies, namely, Fitch, Moodys, and Standard & Poors, remains within the Bs, albeit with changes in outlook at different times. Ghana's Issuer Default Risk (IDR) in the Bs makes the country's bonds risky, and investors who take up Ghana Eurobonds are seen to be speculative.

Hence, they need to be compensated for the higher risks with higher coupons

Generally, the size and tenor of Ghana's Eurobonds are both trending up. From the maiden US$750 million 10-year single tranche bond issued in 2007, we have progressed to multiple tranches, hitting four tranches in April 2021, totaling US$3.025 billion.

Tenors have also gone upwards, with the US$750 million Ghana 2061 bond issued in 2020 going for forty-one years.

As the size, frequency, and tenor increase, investors need to be compensated for the increased risks with higher coupons.

Thus, Ghana's increasing appetite for Eurobonds comes with relatively higher costs. Cost of Ghana's Eurobonds Ghana has been generally successful at hitting its financing targets anytime it goes into the international capital market to raise funds through Eurobonds.

While these successful forays into the markets are seen as a vote of confidence in the economy at the time of issuance, one of the biggest lures for investors is the lucrative coupons on offer.

Coupons and discounts are just two of the direct costs associated with Eurobond issuance. In addition, there is a long list of direct and indirect issuance costs in the form of fees to the array of transaction advisors, book runners, and underwriters. Some of these costs to the state are presented above.