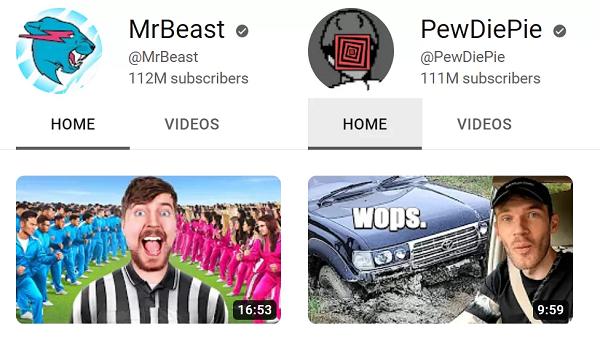 MrBeast has ended PewDiePie's reign as the YouTuber with the most subscribers - the first change at the top in almost 10 years.

Swedish creator PewDiePie, whose real name is Felix Kjellberg, became the most-subscribed YouTuber in August 2013 with his gaming reaction videos.

In 2019, he was the first person to attract 100 million subscribers.

But the philanthropy of MrBeast, really called Jimmy Donaldson, gained him his 112 millionth subscriber this month.

Although YouTube does not show the exact numbers, that pushed him above PewDiePie's 111 million.


MrBeast is known for videos featuring huge cash giveaways and prizes, as well as charity work.

In 2021, he launched a separate philanthropy-themed YouTube channel, which itself has more than 10 million subscribers, and he has a licensed charity that functions as a food bank to feed communities across the US.

And PewDiePie himself donated almost $70,000 to the TeamTrees project.

British YouTuber Steven Bridges, whose videos have millions of views on the platform, told the BBC MrBeast has "mastered the skill" of making compelling content.

"There's probably no other YouTuber in the world who understands it as well as MrBeast," he said.

"Making an entertaining video is one thing, but ensuring that every single second of a video keeps the viewer hooked is very difficult to pull off, and MrBeast's retention - the percent of the video the average viewer watches - and view counts speak for themselves.

"Really, MrBeast is playing the game of making the most entertaining videos that appeal to the biggest number of people, and he's consistently knocking it out of the park.

"I don't think there's any YouTuber out there that's surprised MrBeast has taken the number one spot."

Though neither has yet commented on the milestone, PewDiePie previously said he thought MrBeast would "definitely" overtake him.

And while MrBeast has become the most-subscribed individual user on YouTube, he is some way off having the biggest YouTube channel.

T-Series, an Indian music video publishing company, leads the way in that category with more than 200 million subscribers.

Despite their apparent rivalry for the top YouTuber crown, MrBeast publicly supported PewDiePie when the music video channel rose to prominence.

In 2018, PewDiePie had the top YouTube channel altogether, and became embroiled in a - mostly jokey - public rivalry with T-Series over the top spot.

MrBeast was the first prominent YouTuber to make videos supporting PewDiePie, buying radio adverts and billboards in North Carolina urging people to subscribe to him.

Over the course of a year, PewDiePie eventually lost the top channel spot to T-Series, although he went from about 60 million to 90 million subscribers in the contest, making his lead as top YouTuber apparently unassailable.

That has ultimately proved not to be the case.