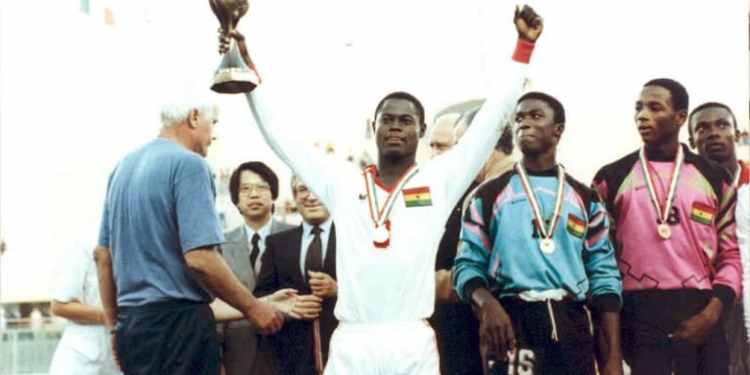 Three decades after playing a crucial role in Ghana’s triumph at the 1991 FIFA Under-17 World Cup in Italy, Yaw Preko believes the absence of pressure on them from the public spurred them on to victory.

Beyond measured expectation of Ghanaians, their success was largely underpinned on good preparation and the presence of with good management and technical team who crafted their amazing global dominance.

Preko was a key member of the all-conquering team whose achievement in the world juvenile championship paved the way for dominance by Ghana at age group competition at the continental and global levels.

He previously featured for the Starlets alongside Lamptey and Asare at the FIFA U-16 Championship in Scotland following which the trio joined Belgian side, RSC Anderlecht.

Reflecting on the tournament and its impact on the careers of his talented teammates, Preko said coming from a disastrous campaign in the previous competition -- Ghana exited at the group stage in Scotland -- there was very little expectation from the public.

“Ghanaians didn’t put any pressure on us to go and win the tournament because ’89 was the first time Ghana watched youth World Cup that their team participated in it so they didn’t put pressure on us at all”, he said.

“It was a team that has been there for quit sometime so the cohesion was there, the telepathy was there. So, after our first experience in Scotland which unfortunately we couldn’t come out of the group stages, we decided that we have the experience so all we needed to do was to qualify for the World Cup then we take it from there.

“Fortunately for us Odartey Lamptey, Isaac Asare and I were the only professionals in the squad and Ben Owu was among the new players. But when you talk about the old players we had Sebastian Barnes, Kofi Mbeah, Willie Brown, Emmanuel Duah and Alex Opoku, so basically it was players who had played together for years so we knew each other.

He maintained that the squad had good preparation and were blessed to have good management and technical team teams who crafted their success story, having warmed up for the competition with a 9-0 hammering of their German counterparts in a pre-tournament friendly match.

That confidence-boosting win also send warning signals as most teams dreaded facing Coach Otto Pfister's Starlets side in the tournament, and their 2-0 win against Brazil in the quarter-final was considered the final before the final.

“We were with Spain in the same group and we drew 0-0 so meeting them in the final was something else. It was a good final and at the end Duah gave us that sweet victory”.

According to the ex-Under-17 deputy coach, because their club in Europe, Anderlecht, needed them back they could not travel with the victorious team to Ghana to join in the celebration but they were equally given a heroic welcome back at their club.

“I remember when we got back to Anderlecht there was a league game, we were youth players training with the senior team, so Otoo Pfister came to Belgium drove us in his car to Germany when the team was in camp.

“So, when we got there, we were dressed in that Ghana’s ‘Agbada’ and they took us to the middle of the field and the supporters applauded us and Anderlecht gave us bronze shoes.

“We didn’t put it at the back of our minds that we were going to win because the previous year the pressure was to try and come out of the Group stages and we couldn’t so this time it was like go and enjoy yourselves.”