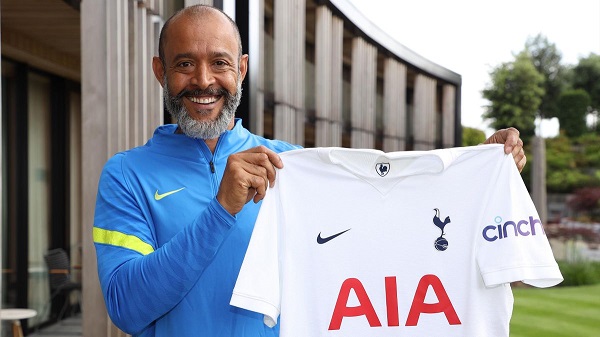 The former Wolves boss has signed a two-year deal with the north London club bringing an end to their long-running search for Jose Mourinho's successor.

Spurs' new managing director of football Fabio Paratici has led the club's search for a new permanent head coach and close the deal as he flew into London for the first time on Tuesday.

The Portuguese established Wolves as a respectable side in the Premiership

Nuno was not a candidate when he left Wolves at the end of the season as Spurs pursued other targets, but emerged as the leading contender in the last week.

"When you have a squad with quality and talent, we want to make the fans proud and enjoy," Nuno told Spurs' club website.

"First of all, I'd like to welcome Nuno to the club," said Spurs chairman, Daniel Levy. "We should like to thank our supporters for all their patience throughout this process.

"I've spoken already about the need to revert back to our core DNA of playing attacking, entertaining football and Fabio and I believe Nuno is the man who can take our talented group of players, embrace our young players coming through and build something special."

The Portuguese brought Wolves into the English Premier League in 2018 and established them as a top-half side - twice finishing seventh and once qualifying for the Europa League -- until last season, when they ended 13th.

Previously, he had stints at Valencia, Porto and Rio Ave, where he steered the side to two cup finals and qualification for the Europa League for the first time in their history.